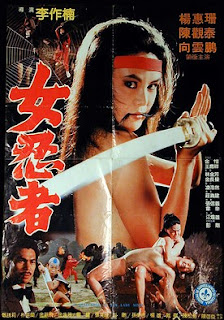 This is my review of this film from the IMDB written back in 2006. I don't think there is much to add except my score out of 10 was 9.

A Chinese girl living in Japan takes the final test to become a NInja. Once she passes she is told that her father has been killed back in China and she goes home to mourn him and to find out what happened. Arriving there she finds out that he father was killed by the man she was betrothed to who is now collaborating with the Japanese against the Chinese. (This is this the first mention of the film taking place during World War Two). Using her ninja skills she breaks into the bad guys house but is set upon by four ninja in his employ. She is wounded and only escapes thanks to a man in a skull mask. Vowing to put a stop to the evil going on she sets out to train a group of woman as a ninja army to help her.

This film is a great deal of fun. What can you say about a film that introduces the bad guy with the Empire theme from The Empire Strikes Back and where the lead wears a bright red ninja suit? It just goes from the minute the film starts straight to the end. You're never more than five minutes from any sort of action sequence so the pacing never flags. You won't care that the plot often seems like its being made up as it goes along,since it all just carries you along. How can you not love a film where a female ninja power is to be able to appear in a bikini in order to arouse your enemy into an act of stupid lust?

This is great popcorn movie. If you get the chance see it with a big bag of popcorn and an empty mind and you'll have a great time.

(Note: reading reviews of this film at IMDB there appears that there are a couple of different versions some where the dubbing makes the bad guy the brother of the ninja instead of the betrothed; and some with no nudity and some with a few bare breasts. I have no idea which title is which version, however I don't think it will really make a difference which version you see)
Posted by Steve Kopian at June 28, 2013