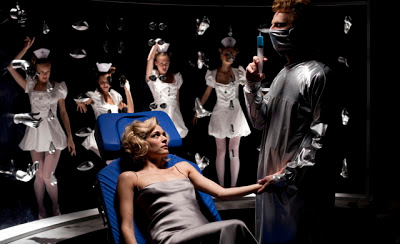 After a truly bizarre opening sequence with bandaged men and women staggering zombie like through the forest this farcial satire settles down into a look at celebrity, good looks and the all mighty dollar as Belle, the host of a TV show on plastic surgery is injured by a flying toilet. Taken back to her husband's clinic (he's the surgeon of the show) a media frenzy erupts as the public waits to see what will become of Belle's face.

When the film works, which it does frequently, it is a funny comedy of vain-ity as everyone tries to get their own. The performances are spot on. The look of the film is something akin to Fellini meets Busby Berkley meets art deco is a wonder to behold.

Unfortunately this brings me to the script which doesn't match cast or the design. Not only are its points obvious, but it also is a bit too scatological with a line about laxatives repeated every couple of minutes and a grand shower of shit a climax of the film. (I have nothing wrong against either, I simply wish they were funnier)

Ultimately this is an enjoyable but very minor farce that would play better if it wasn't trying so hard to actually be about something. They say satire is the thing that dies on Saturday night, but for my money it's only when its poorly done, and here it's just adequetely done. Satire shouldn't bash you over the head and here the film does just that as it hits the easy targets of fame, greed and instant stardom. The points being driven home here aren't anything new. However there are times when the film is quite funny. If you can get past the desire to say "no duh" you'll have a good time.
Posted by Steve Kopian at June 06, 2013