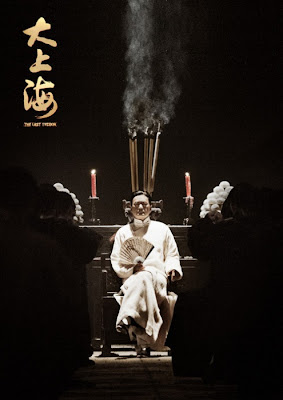 The plot of the film has Chow being the number two man to Sammo Hung in a surrounded Shanghai. Insisting that it's business as usual, they are in the French sector of the city, they carry on as best they can. Flashing back to Chow's early days we watch as he meets and falls for a young girl with aspirations to be in the Peking Opera. They are separated when he's falsely accused of killing his boss and raping his wife. Thrown into a cell he meets a gangster who allows him to go along when he escapes.  Chow becomes a gangster himself and the love of his life is the star of the Opera. The couple meet again in the occupied city and a massive game of cat and mouse between numerous factions ensues.

There's more, much more, but that should get you started. Juggling a huge cast and spectacular locations The Last Tycoon is in it's way a throw back to the huge sprawling epics of Hollywood in the late 1950's and early 60's. For a while I kind of wanted to even compare it to Casablanca but then characters turned and the plot line spun out into different directions, this film is far from Casablanca and is it's own wonderful animal.

Primarily a character driven film, almost all of the film is driven by how the characters feel for each other. Loyalty, love and hatred all play a large role in why characters do what they do. I don't think that a single character does anything for something as mercenary as money. Yes the gangsters are out to make money, but that is secondary to the action of the film, here we have characters interacting because of how they feel about the others. Even the patriotic or  not so patriotic acts are driven in some way by the desire to help or get back at someone. There is a complexity to it all that is truly astonishing in this day and age. Frankly I have rarely seen so many "major" characters drawn so well and so completely.

The cast is incredible, I should praise everyone individually but I 'm going to the two actors playing Chen Daqi. Chow Yun Fat turns his best performance in several years.  I know I said the same thing about his role in Let the Bullets Fly, but this is even better. this is Chow completely off autopilot. This is Chow giving a performance the likes of which he hasn't done in decades. All one need to is watch his face during the elevator sequence when Chow and his lost love see each other for the first time in decades and you'll realize this is a complete performance. Equally amazing is the climax of the film. Chow is simply not phoning it in. 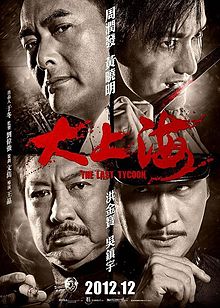 Equally good is Xiaoming Huang as the young Daqi. He's scary good, with his performance perfectly matching Chows ticks and mannerisms to the point that you'll completely believe he and Chow are one. He's so good that it's possible that he's better than Chow because you'll remember him as Chow.

And then there is the action. There are several stunning set pieces that are sure to go down in film history. The church, or the Peking Opera sequences for example. More importantly as good as they are, you do not lose the characters, nay they actually manage to enhance the characters- think about how you feel after the tong street battle- yest its a damn cool bloody battle, but by the end we know more about several of the characters then when we went in. How many action films can claim that?

This film is a masterpiece. More importantly it's a must see film at the New York Asian Film Festival.
Posted by Steve Kopian at June 26, 2013