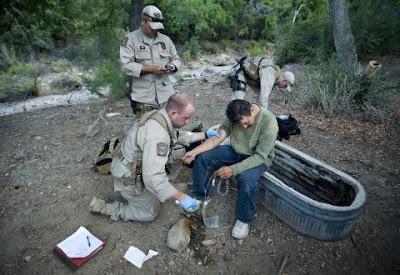 In search for the American Dream they lose it all in the desert. - US Border agent

Troubling look at the situation along the US border with Mexico and the cost in human life for those who decide to go from Mexico to America in order to get some money and perhaps a better life.

We follow several story lines:
It is a sad film where there are no winners, people die with frightening regularity—200 bodies are found each year in Arizona alone.

I'm not sure what to say about the film.

The film is somewhere beyond criticism, I mean the film is simply a you are there look at people from both sides of the border doing what they have to do. The various people tell their stories and we are left to ponder it all. There is no preaching or anything like that just the situation as it affects various people...which can't help but leave you, like it left me, deeply bothered since it's clear there are no easy answers.Actually the only thing there is a real sense that its all wrong.

If a great film is one that makes you react to what it's showing you—even if it's to make you realize you don't know what to do, then this is a great film. See it. You will be troubled by it.

This plays at the festival on the 21st and 22nd. Details at the Human Rights Film Festival website.
Posted by Steve Kopian at June 16, 2013