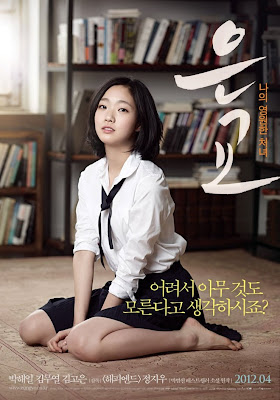 The Muse, or more properly Eun-Gyo, tells the story of a famous poet of around 70 who lives a quiet life. He putters about and gets along with the help of an assistant. When the assistant, a writer in his own right, takes an assignment the poet takes in Eun-gyo, a local high school girl he had found sleeping on his patio to do some cleaning and other chores. He's smitten and inspired, however she is so much younger than him. He begins to write a novel of an imagined affair...

Solid drama largely takes things into unexpected places and is for the most part a very entertaining film. It's a great film to curl up with on a rainy afternoon.

If my feelings toward the film are not more rave worthy its because I'm unhappy with the casting. Hae-il  Park was 34 when he took on the role of the older poet. That's all well and good,and there is a reason for it, but the make up is uneven and the performance suffers because he moves like a man of 34 not 70, certainly not a 70 that needs someone to clean for him.

Reservations aside, this film is worth a trip to the Walter Reade when it plays this weekend since it represents one of the better recent dramas I've seen from Korea.
Posted by Steve Kopian at June 27, 2013