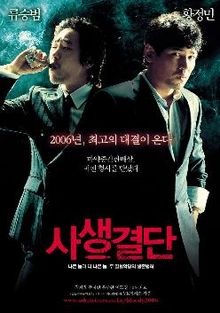 Ryoo Seung-Beom stars as drug dealer and frequent informant who views it all as a business. When the local DA begins a crack down on all drug business, the detective who promised  Ryoo immunity is suspended after a bust goes wrong it leaves Ryoo screwed over and thrown in jail.  After getting out of prison  Ryoo is again approached by the detective who has returned to the force. It seems the detective wants revenge on the kingpin  who is responsible for all his troubles and he needs Ryoo to make it happen...

Blackly funny action film works largely because of the interplay between the various characters. Ryoo's conniving drug dealer is hysterical as he tries to stay out of trouble and protect the one he loves. Hwang Jung-min as the detective is equally good as a cop who is prone to wearing his sunglasses at night and doing things that are effective but the height of wrong. The collisions between cop and crook are for the most part wonderful and drive the film forward.

Unfortunately as great as the performances are the script occasionally lets them down. The problem is that the plot isn't as tight as it should be and it feels like it was made up as it went along. While it makes for a fun, if occasionally bloody ride, it also makes for a film that we aren't quite as invested in as we should be. This isn't to say that the film is bad, oh dear lord no, rather it's simply to say that the film is simply one or two steps down from being one of the best films of the year.

I do want to say that the film has several different titles the two best known  are Bloody Tie (which appears to be the the original release title) and Bloody Ties (which is how it's out on US DVD and on Netflix). The most accurate title based on what happens  in the film is Bloody Ties since everyone is some how tied to some one else. Now  I know my mentioning the film is on DVD and Netflix probably just gave the NYAFF people kittens since it means that people may not go to see it in the theater- but unless you physically can't get to the theater you MUST see this on a big screen. The film is truly made to be seen widescreen and there is frequent use of split screen  that looks just okay on a flat screen looks amazing BIG, especially at the Walter Reade.