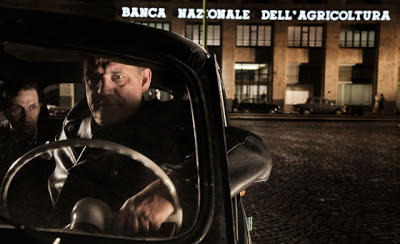 A big screen must see film has the feel of the great Italian crime films from the mid-1970's. This is a near great film looking at the battles between various political forces who'll do anything to maintain and gain greater power.

The film is a based on a book by Paolo Cucchiarelli and tells the story of the bombing of the Banca Nazionale dell'Agricoltura that was located in the Piazza Fontana. The bombing took place on December 12 1969 and was blamed on anarchists. However the truth was much more complicated and only really began to be looked at when Anarchist leader Giuseppe Pinelli died in police custody. While the death unto itself is bad news, the fact that no one could agree on what happened beyond that he fell out a fourth story window, began to shine light on what was a rotten situation. The bombing wasn't just a political act of terror but something darker.

Beginning before the bombing, at a time when Italy was in political turmoil and being pressured from NATO, the US and in fear because of a coup in Greece, the police are just trying to keep the peace, When a cop is killed during a protest some feel it's time for sterner measures and a clamp down on the Communists and Anarchists who are setting off bombs. Police Commissioner Luigi Calabresi is tasked with keeping an eye on the various groups. That all changes with the bombing and the death of Pinelli on his watch and it isn't long before he's down the rabbit hole and realizing there are darker forces at work. 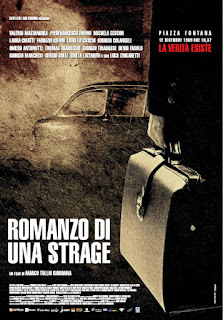 The film has rightly won numerous awards around the globe and it's hard not to see why. The case is amazing, the story telling is first rate (Don't worry if the film throws lot of people and places at you it will all come together when the bombing happens). The look of the film is fantastic. Its a gorgeous wide screen film that makes you feel as if you are there. A near perfect recreation of the time and places of the early 1970's this is a marvelous film that puts us into the rabbit hole with Calabresi as he tries to figure out who is behind the bombing that killed 17 and wounded 88. As a film fan I love that the  film feels like many of the crime films of the 70's I grew up watching on late night TV.

While the film has a single flaw that keeps it from being truly great (It could use a bit more back story), the film does manage to over come any reservations on my part by transcending being simply about the one bombing in order to be about the use of terror in a "free" society. This isn't just about Italy, this is about how our own government and their agents and allies could use terror for their own ends. Why would some people think that US government stage something as terrible as the 911 attacks? Because some people in the Italian government would bomb their own people. Additionally in detailing the course of events,it also shines a light on the Italian justice system that prosecuted Amanda Knox and botched case that was detailed in Douglas Preston and Mario Spezi's book The Monster of Florence. Is this justice? I think not. 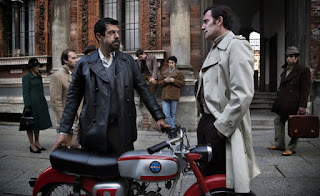