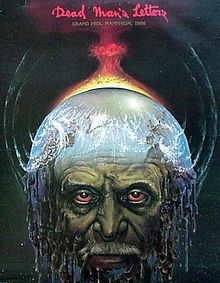 Konstantin Lopushansky's Letters from a Dead Man is a dark depressing look at life after a nuclear war. As the government struggles to maintain control people try to just survive and find their way into the central bunker. There are curfews and a shortage of supplies. Bodies litter the rubble that passes for streets. Perhaps the war is still going on, perhaps not. Everything is perpetual twilight.

The film follows a noble prize winner living in the basement of the history museum. He is there with his wife and several other people. During the days he travels from place to place trying to find out what’s going on and get supplies. In order to pass the time he composes letters to his son.

At last a post-apocalyptic film that feels right. Gone are the nonsense of most American films (mutants and roving bands of bad guys), here is a world on the verge of death- there is no sign of nature other than wind and rain. People are struggling on not sure of what to do. The government is in a kind of control, which they seem to have because people want there to be order. People are dirty. Things are broken. It looks like things have been bad for a long time. It’s a film that feels like it has been lived in, perhaps even slept in. This is the apocalypse of your nightmares…or it will be once you’ve seen it.

This is the story of the end of us. Hollywood and other filmmakers have made similar films but they have always made it easy and simple. From Testament to On the Beach to almost any other end of the world in nuclear war they have things pretty much as they are until people just quietly die. It never felt right to me, it felt like an affectation and not reality. Here it all feels right. War came and we all got caught in it.

If there is a flaw in the film it’s that some of the talk seems rather too intellectual, but I suspect that since our hero is a highly intelligent man this would be the head space he lives in.

I really like this film a great deal. It is, for lack of better word a breath of fresh air. It’s a film about the end that gives you pause about life and its end.

This is one to track down if you’re tired of the same old Hollywood crap.
Posted by Steve Kopian at June 19, 2013