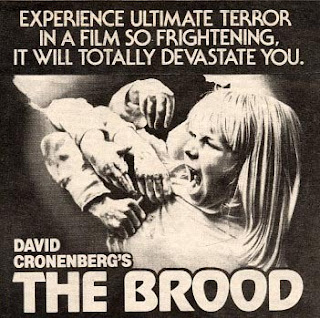 I think the first David Cronenberg film I ever saw was The Brood. I’ve been scared ever since. I’ve also been a fan.

The film, one of Cronenberg’s bodies in revolt films, concerns a father trying to find his wife. It seems that Art Hingle’s wife, Samantha Eggar has gone off to a clinic to learn to deal with rage. Actually what she’s learned to do is to give physical form to her rage in the form of small child like beings. The result is an eventual bloodbath, especially when you consider that the beasties are nothing but engines of rage.

When the film was over I was deeply disturbed. I remember seeing this on cable and then going into my mom, a huge horror movie fan, to see if she had seen it. She hadn’t, but she would and she would be equally disturbed.

Seeing the brood for the first time was one of the most visceral experiences I’ve ever had watching a movie. Actually most of Cronenberg’s body horror films were like that, films that were troubling not only deeply intellectually (I mean what sort of person would give birth that way?) but also emotionally, (It was all just wrong) and somewhere deeply primal (I mean REALLY REALLY wrong).

After seeing Cronenberg’s films usually I disconnect from reality and walk into things because I’m so disturbed (I almost drove off the road after seeing Videodrome) . And it’s not the blood or the visuals that mess you up, it’s the ideas. Even if we never saw the gore we’d still be messed up simply because the ideas are enough. (Though the sight of seeing Eggar freeing one of her children does turn your stomach just the idea of her tearing at the sack they come from will turn your stomach). 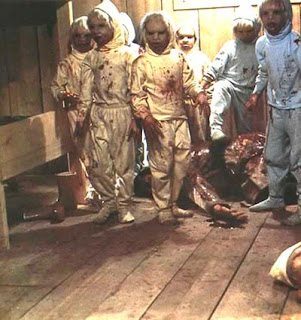 If you’ve never seen the early work of David Croneberg you owe it to yourself to do so. This is the perfect place to start, it’s one of the more polished of his early films and a complete kick in the chest.

A must see for those who think they are prepared.