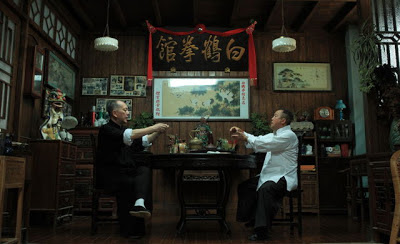 I'm tired of Ip Man. At this point I've seen all the various films and I'm tired of the character...on the other hand earlier tonight I got to see probably the best portrayal of the character thanks to Anthony Wong. He single handedly made seeing Herman Yau's film worth while.

For those who don't know Ip Man is best known as the master who taught Bruce Lee. He was a master of Wing Chun and could pretty much kick anyone's ass. In recent years he's been the subject of at least four other major films, two with Donnie Yen in the lead, a prequel (The Legend Is Born Ip Man) with Yu-Hang To  who looks like Donnie Yen and then there is Wong Kar Wai's artsy The Grandmaster, in which Ip Man is a ultimately a secondary character(no, he is).

This film picks up in 1949 with Ip Man arriving in Hong Kong. The film, which is narrated by his son (his son was involved in the production) then follows his life episodically until just before his death. Its a film that is more character driven than action (though there are some great set pieces) and is for the most part solidly good. I can't say much more about the plot than that.

On the other hand the film has Anthony Wong, who once again proves he is one of the most under rated actors in the world today. Simply put if there was justice Wong would be getting every acting award under the sun for his incredible portrayal.

Yes, I know Ip has been done, but never like this. This one feels right. This one feels human. This one matches up with everything I've ever read on Ip Man and seen in the films and photos. Yeah, Wong's physically bigger than Ip but Ip lives in Wong in a way that is scary good.

I won't go into details, I'm too damn tired for that, but look at three scenes. I'm going to mention three bits for you to watch-I mean really watch particularly his performance and you'll see how great he is.

First watch the scene where Ip arrives in Hong Kong. Watch him as he arrives at the home of his friend and is shown in.Watch Wong's facial expressions, his eyes and face, watch his body language as he shows the weariness of  just wanting a meal and a not a fight. It's all in the small gestures and looks,this is a person not a character. Its brilliant. Yes the fight on the paper is classic, but watch Wong before it- no gesture is wasted.

Next watch the climatic fight. Watch Wong's acting. Okay yes its huge action sequence, but at the same time there is strength of character beyond breaking heads. You sense the man at the center of the fight. This is a man fighting for something. Brilliant.

Lastly watch the weariness when he is filmed at the very end. You feel the age, you feel the time. You sense the man and when you see the real footage you know that Wong got the spirit of the man dead nuts right if not in actuality.

Its a performance for the ages boys and girls.

The rest of the film is just good. It's not that there is anything really wrong, it's simply that the film is covering 23 years in 100 minutes and things kind of get lost in short hand. There's nothing wrong with that, except that Wong's classic performance unbalances a film that can't match him.

Definitely worth  seeing when the film is released in the US in September...hell I'm going to buy the DVD and probably go see it big again.
Posted by Steve Kopian at June 30, 2013