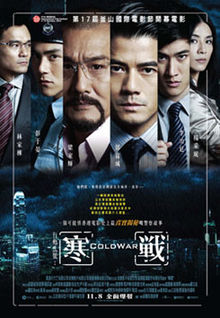 While the police commissioner is out of town five police officers are kidnapped and their command vehicle is stolen. As the police try to find the missing men and women, the two deputy commissioners battle each other and the system in an effort to get the men back.

The best reason to see COLD WAR is Tony Leung Ka-fai who turns in an award winning performance. Playing Deputy Commissioner Lee he has created a role on the order of  what Anthony Hopkins did with Hannibal Lechter where you can't take your eyes off him to the point everyone else on screen disappears.(I should point out that Lee is a good guy and I'm using the Hopkins analogy for comparison) Trust me on this this is a role people will be talking about for decades.

The rest of the film is okay. I should probably say that the film is just good but the boat load of awards and the large take at the Asian box office makes one feel that there should be more here then some CGI enhanced action sequences and a confused script.

Actually the real problem here is the script. The film hinges on a conspiracy plot that is so large it ultimately makes zero sense. For me the more the film went on and the more of the plotting was revealed the less sense it made. Without giving too much away it is an unwieldy brute that gets more and more complicated simply because it will allow for numerous sequels, the first of which is implied by the final fade out. The whys and wherefores really don't hang together even on a basic level with the result you kind of stop caring once you realize it's going nowhere other than the typical- and you thought it was over denouncement.

Don't get me wrong I don't hate the film, rather I kind of feel its over rated.

Worth a look for Tony Leung Ka-fai's performance.
Posted by Steve Kopian at June 28, 2013