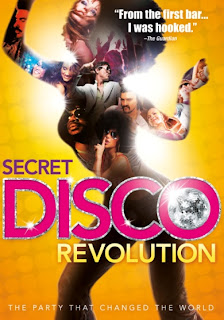 Jamie Kastner's positioning  of disco  as a protest movement for black, gays and women is alternately brilliant and jaw droppingly bizarre. Quite simply I don't know if this is supposed to be taken seriously or is a joke.

Kastner's film is the history of disco from it's creation onward. Told as if it's an expose of some hidden "masterminds" looking to change the world the film is filled with great music, great talking heads and mostly great history. The core history of the musical genre is fantastic. Its all the right people talking about the music, the time and how the music changed things....

...the problem is that the stentorian academic narration coupled with the actor portrayals of "the masterminds" completely wrecks or at least seriously wounds what should have been a great film. While this should have been a great serious documentary the narration makes the film seem like it's a joke. From the moment the film begins and we hear the narration we question if we're supposed to be taking this seriously. Its clear once interviews begin we are, but the knowing narration runs roughshod over everything making it so much less than it is.

The other problem is, aside from a bad choice or narrator, is that the film's harebrained premise that the changes that disco wrought in society came from an organized secret protest is beyond stupid and completely unprovable. There was as the interviewees state there was no grand plan, only dancing and good times so any effort to say there was is completely ludicrous. this isn't to say that the music didn't change the world, it could be argued it did, but it did so accidentally without a grand plan. Frankly had Kastner made a film that charted the course of how disco changed society without the Illuminati bullshit he'd have one of the better films of the year. As it is you have to go et past the stupid narration to get an intelligent history.

If you can get past the crap narration this is worth a look.