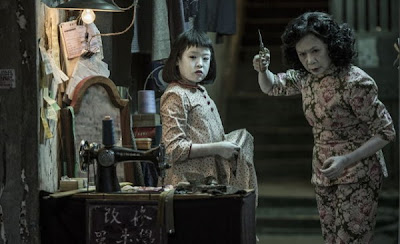 World premiere film was only delivered the day before the screening with the result that none of the Subway Cinema NYAFF people had actually seen it.  I have no idea what they thought of the film, but me, I thought it was one of the better ghost story films I've seen in years. Its a great mix of funny and scary.

Based on stories by Lilian Lee (she consulted on the scripts and wrote Simon Yams portion of the film) the film tells three ghost related stories.  They are completely unconnected except by the fact that each one has to do with ghosts in some way (I mention this because several things I've read mention that the film's stories spring from what  would be the events of the final story which isn't true).

STOLEN THINGS was directed by Simon Yam and its clear he has a future behind the camera if he wants it. The story has him playing a down on his luck guy who isn't all that bright. Failing at a series of jobs he eventually makes a fateful decision to get quick money that will bring him into contact with the ghosts that wander Hong Kong.

Possessing a great deal of style  the segment quickly builds a good amount of tension as we see a good number of ghostly figures wandering around the city. The piece then settles in as we watch Yam going through his daily routine to try and get and maintain a job and get money. The fact that Yam's character doesn't seem to be all there only adds to the unsettling sense of the world- does he actually see the ghosts that seem to surround him?. Eventually the scares come and if they are occasionally the result of shock jumps it's okay since Yam genuinely creates some real tension and emotion to make the jumps scarier.

If the segment has any flaws its that it kind of leaps to it's conclusion rather unexpectedly. What it is I can't say, but it doesn't feel right. I felt like I missed something. The coda works but there is a small hiccup getting there that diminishes things just a bit. Quibbling aside it's so much better than most horror films these days we should simply be grateful.

The second part is Lee Chi Ngai's WORD ON THE PALM. This mix of humor horror and melodrama has a man who gives fortunes trying to get back with his wife and son. His son is a promising classical musician in the Western style. His wife doesn't like that he can see ghosts and so has left him. Promising to give up his business and go back to music, he heads in for his last day in his shop. Unfortunately a couple comes to his shop with a problem and it isn't long before he's mixed up with ghostly problems while trying to make a dinner date with his wife.

Creepy, funny and rather moving, this segment is probably the most solidly built of the trio, it doesn't really  have any flaws. Its a kind of ghostly detective story with heart that is weirdly bittersweet. I really liked this segment a great deal.

The third part of the film was directed by Fruit Chan.is called JING ZHE  This story concerns a woman who essentially sells curses by beating paper villains for various people. The paper villains represent people that are to be cursed. We watch as she goes through her evening of selling her services until she meets a certain young woman at the end of the night.

Fruit Chan has crafted what is largely the best of the bunch and damn near one of the best ghost stories I've seen. Its creepy and off kilter tale with a sting in it that is ultimately more sad than scary. The problem with the film is that while Chan has crafted a strong segment with a real emotional kick he derails things by a late in the game black humor flourish that knocks the wind out of the sails. It doesn't kill the film it simply makes what should have been a true classic of the genre simply an almost classic.

When it was all done the film left me feeling rather uneasy and a little afraid to go home so late at night. Honestly I was glad I had someone to walk to the subway with when it was done.

For my money this is a super little film that I can't wait to see again (It opens in Asia July 11) and more importantly it has made me look forward to the sequel which is released over seas August 1.