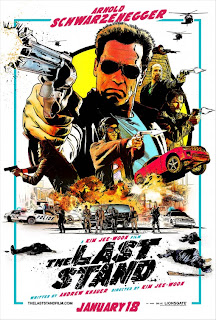 I’ve read that director Kim Ji-woon never wants to repeat himself and that he wants to simply make a film in a different genre each time out of the box. I’m trying to decide where Last Stand fits, is it a big budget American action film or is it a western? I’m not sure.

Last Stand marks the big screen return of Arnold Swartzeneger to the big screen as a star. It’s a throwback to some of his mindless action films of the 80’s and 90’s when he ran around killing bad guys. Here Arnold is a sheriff in a small town. He’s enjoying the quiet after years as a cop in LA. When the henchmen of a soon to broken out of jail drug lord come to town the battle lines are drawn.

With bad guys, who’s overly complicated and bloody plot makes no sense what so ever this film is in its way a western in the style of High Noon’s children where one good man, or a couple of good men and women hold off a truly bad man. It’s a film that had it been done with horses and a bit more sense would have been a classic with Randolph Scott in the lead.

As it stands now the film is a welcome return to the big screen for Arnold. He’s suitably world weary. He’s an older guy who just wants things to be quiet but can still kick ass if he has to. On a plus side the time being fake as a politician seems to have improved Arnold’s acting, he seems less stilted and more real. For me it’s a nice improvement.

The film boasts some great action set pieces. The escape and the final fight in the town are great fun…

I just wish that the film made some kind of sense. The plot to free the big bad drug dealer is incredibly stupid and over blown. The actions of the FBI to track him down are stupider and the behavior of the drug dealer himself are a certain R word I won’t use because some people take offense. His actions are evil, but not because they are logical, rather because they will counter the good guys plans. (And I won’t get into the identity of the mole which makes zippo sense). Frankly the film feels like it was made up as they were shooting…

… which assuming you leave you brain at the door isn’t bad.