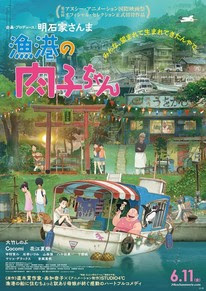 With GKids releasing FORTUNE FAVORS... this week here is a repost of my Fantasia review from last year
If you can see FORTUNE FAVORS LADY NIKUKO do so. This gentle loving slice of life is an absolutely beautiful film about life as it is lived. It is wise and warm…. Which makes it a film that most companies releasing animated films outside of Japan may not touch because they simply won’t know how to market it.

Told from the point of view of Kiku the daughter of the title character, the film tells the tale of the pair as they live their lives in a coastal town. Kiku goes to school while her mom works in a local café. Life is a struggle but Nikuko will never allow the world to get her down.

Not much happens, and yet everything does. We watch a woman struggle to find happiness and not let life get her down. We also watch a well read preteen try and navigate being a kid, sorting out  what it means to be a friend, boys and the first throws of puberty.  There are no super battles or wickedly cool spectacular sequences of aliens, just the beauty of real life. And if there is a late in the game bump I didn't mind.

Full confession- one of the things that moved me about the film was the character of Nikuko. She reminded me of my mom in the best sort of way. Despite having lost her some 15 years ago watching the film I found that I was watching her running around trying to turn a bittersweet life into something happier and at the same time bring joy to her kid. Watching Nikuko I was watching my mom when she was reconnecting with her inner kid and being alive and enjoying life. That may not mean anything to you, but if you were lucky enough to have ever met my mom you’d know I was right,

FORTUNE FAVORS LADY NIKUKO is a great film. It is a deeply moving slice of life. It’s a gem that will be treasured by those who realize that animation isn’t always for kids, rather it is a way of telling a story you couldn’t tell any other way.