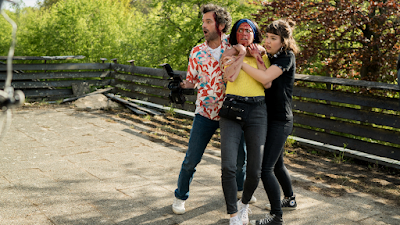 Michel Hazanavicius, The director of THE ARTIST, remakes ONE CUT OF THE DEAD and all I'm left to wonder is why?

I am not going to go into details concerning the plot because the film is a puzzle box that changes in every third. Nominally the film is about the shooting of a zombie film that goes horribly wrong when real zombies attack. What happens after that is the film

Then I assume you know the original and I can discuss this version.

Execution wise the film is essentially exactly the original. The film is set in France and everyone has Japanese names. They took the original script and tweaked it slightly (I mean the film runs about 15 minutes longer than the original) and trotted it out as something new  It feels so close  to the original at times I was wondering why I was bothering to watch this version, (When this was announced for Sundance, where it was originally supposed to premiere,  there was no mention of it being a remake and five minutes in I knew I had seen it before).I mean everything carries over.

The one big change that Hazanavicius made was he brought his sense of humor to the proceedings. There is a broadness and silliness to the comedy that you either love or hate. He makes things sillier than they were with the result being that if the humor doesn't click it will seem stupid. I'm not a fan of his humor going back to his earlier films and understand why his films, outside of THE ARTIST, never clicked in the US.

If you saw the original you can skip this version