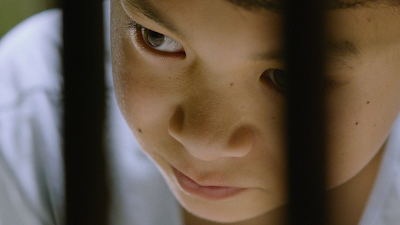 In the northern part of Japan where the people are ethnically not Japanese, a village wrestles with the past tradition and who to move forward. At the film's center is 14 year old Kanto who is struggling with the death of his father. He is uncertain if he wants to move away from the old ways or if he wants to embrace tradition

Moody exploration of the struggle that every group now faces in a global society, namely do we give up the past and our heritage in favor of some promised future. Will letting go of who our parents and ancestors were are allow us to be who we are today? It's not an easy decision to make, more so when in the case of Kanto knowing that  moving away may result in never being able to reclaim it (the native language is largely not spoken any more).

Well acted and beautifully shot this is a thought provoking film that is perfect for those who like deliberate and carefully measured films.
Posted by Steve Kopian at May 05, 2022