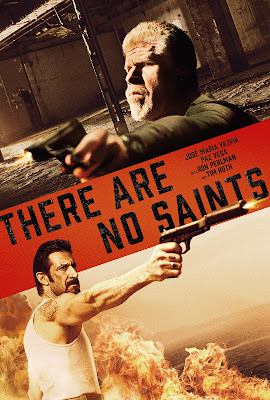 The Jesuit, a notorious gang assassin is released from death row when the cop who arrested him flips his story on his death bed to say he planted evidence. Back on the street he wants to make peace with his son and move on. However the cops and the gangs want of part of it and try to kill him. When his ex-wife is killed and his son kidnapped he has to wade back in and try to keep the one person he loves safe.

A great cast and a great director manage to take a really bad script from Paul Schrader into a pretty good action film. Seriously this film has mood to burn, not to mention some kick as action set pieces. How this was written by Schrader eludes me since it seems more like some trying badly to copy Schrader with it's purple dialog that no human being would ever say, the religious over tones and the plot motion that feels completely contrived. It's really bad and if the cast and crew weren't so good this would be a pile of crap.

However the cast is great (though the big names are all in this fleetingly) and the action bone crushing. The fights left me feeling stung. More importantly pretty much all of them have a genuine real world weight that the movies don't usually have. They are so good they put many bigger budget films to shame.

This is a stunning little thriller and if you can forgive the stupid script turns this is going to delight you especially if you are jonseing for a solid action film.