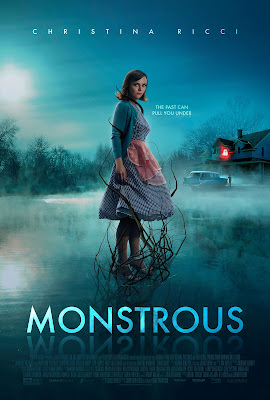 MONSTROUS is a film that’s hard to explain. I say that because this is a film of layers, of turns and of moments that happen and make you realize what you’ve been watching is no the story you thought you were watching. It’s one of those films that causes you to talk to the screen as new details shake your perception of reality.

I have been thinking about this film for several hours now. As I write this about 10 hours have past since I finished the film. I've been turning it over and over in my mind trying to sort out. As I did so I realized that this is the sort of film that my opinion of the film changed. This is really fun ride. However once you get to the end the film changes. It becomes a good film of a different sort, I mention this because this is a film you need to see knowing as little as possible.

Set in 1955 the film has a mother and her son fleeing to a remote house by a lake. They are looking to start over after escaping from an abusive ex. Both mother and son are deeply scarred and lean on each other to get through their days. However things are not as calm  as they would like as there appears to be a dark presence lurking in the lake.

I will not get into any details however I will say that Christina Ricci is dynamite. I know she's been great since she first appeared on the scene, however there is something about this role which takes her to the next level. She gives the sort of a performance that makes you go WOW.

This is a nifty little thriller and its worth a look.