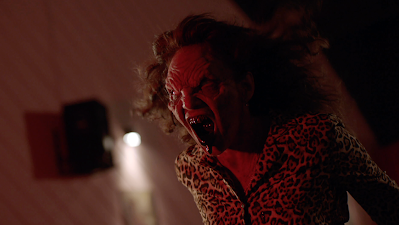 No- I really love Legions. I mean when was the last time that you saw a horror film that made you misty in the best possible way?

This is the story of a shaman who has been locked up in an asylum. He shuffles through his day hanging out with the other patients and spinning stories of his adventures. His daughter’s boyfriend is working to get him out. Things take a dark turn when a red moon like the one under which his daughter was born is predicted. This coincides with a visit with a young woman who brings a warning that a certain demon is planning to sacrifice his daughter. The shaman has to get out of the hospital and restore his daughters faith.

Demonic horror meets with a family drama to become one of the most wonderful surprises of the year. This is a magical film that is not only suspenseful but funny, and surprisingly deeply moving. In all seriousness the end of this film made me get misty for the best possible reasons. I don’t know when that happened in a horror film.

What makes the film work as well as it does is that it refuses to do what you expect. First in an age when effects and jump scares are the norm, Legions leans back into the characters. This a film where the people are the reason the film exists. Yes there is blood and gore, but they aren’t the reason we are here. We’re here for the journey of the characters.

More importantly the film refuses to follow the modern rules of horror. There isn’t a scare every X number of minutes. The film isn’t a series of gotchas. What I love is the film ends and there is no last minute dark turn at the end just because. The humor is gentle and not cruel. And as I said above the film insists on having characters we care about wandering around. No one is expendable so it hurts when someone dies.

This is a truly great film on so many levels, I can’t say enough good about it.

Finding films like this is why I love Fantaspoa

This film screened as part of Fantaspoa 2022. For more information on the festival, please visit www.fantaspoa.com.
Posted by Steve Kopian at May 01, 2022