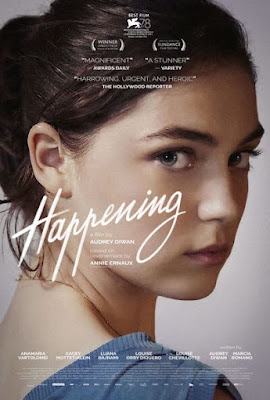 Happening is a French movie that takes place in the 1960's before abortion was legal.

The film is about a girl named Anne who's in high school and after missing monthly periods and feeling sick, goes to the doctor, to find out she's pregnant. She asks the doctor to help her, that she can't possibly keep it. The doctor shuts her up and says she can't talk about such things and that girls end up in jail for such things.

The movie shows her trying to find ways to get an abortion. She goes to another doctor and begs for his help, asks her 2 closest friends, who won't even speak to her about it, saying that just knowing what she might do can put them in jail, she asks the guy who got her pregnant for help, and others, and then even tries to give herself a DIY abortion.

This movie was brutal to watch. Even writing this review is reminding me of how hard it was. This movie is not for the faint-hearted, which I am. I felt lightheaded and sick from watching it. I will say I wish I hadn't seen it because it was really too much for me, but this movie is so important and SO relevant, especially with what is going on in America. People need to see what life was like before abortion was legalized and what life can become again for many.

I wish that every Republican or person who is against abortion would watch this movie to see what women used to have to go through before it became legal, and what they might face now that they are overturning its legality. I would be surprised if anyone watched this film and didn't feel uneasy and upset.