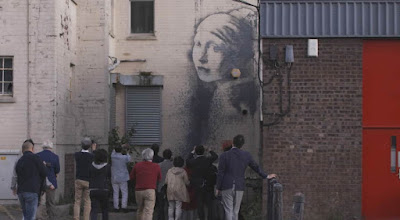 There seems to be an endless parade of films "about Banksy".  They are all sold in such away that them make you think they are about him but they are really not. In the last few years we have had SAVING BANKSY about trying to save one of his works, CHASING BANKSY a narrative about trying to take a Banksy off the side of a house, THE MAN WHO STOLE BANKSY about a guy who stole a piece of his art, THE BANKSY JOB about an artist who steals a statue because he was mad he wouldn't sign a piece of art, BANKSY DOES NEW YORK  about an NYC residency and there are more. That doesn't include the art docs where he is mentioned. All of them dealt with his art and not the man....

...which is why BANKSY MOST WANTED is so vital and important. It is a film that is about the man, or as much as one can know about a true ghost, through the lens of a discussion of his career and the quest to unmask who he really is. This is the first film, or at east since EXIT THROUGH THE GIFT SHOP, that is really about the person and not just about a specific work or exhibition.  The result is this is one of the more informative and compelling Banksy films you are likely to find.

To be certain there are no answers. While Banksy may have been seen in some video putting up his art,who he really is is not revealed, but while watching the film I got the feeling we really don't need to know. Nay, we really shouldn't know who he is because once we do we suddenly will have a limit on the canvas of our imagination. More importantly once we know who he is we will incorrectly start to force limits on his work that shouldn't be there. So what if he is, say a bricklayer from Scotland, that shouldn't influence his art. It didn't before and knowing that now shouldn't change how we see what he does.

What I loved about watching the film was I got a better sense of this Banksy creation than I had before. The dots were connected up and I grew to truly appreciate his entire body of work more than I had before.

This is a great film and highly recommended, especially for anyone who is a fan or has any interest not only in his art but modern art, both of the museum and street variety.
Posted by Steve Kopian at May 11, 2022