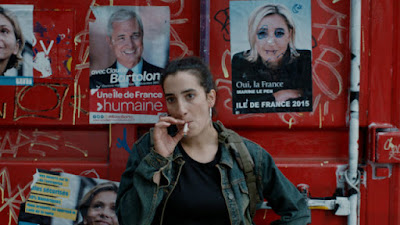 This a portrait of suicide bomber Hasna Aït Boulahcen, who went from regular girl trying to protect her family to one surviving on the streets to a radicalized young woman who blew herself up in 2015.

A kind of hypnotic film this is a film that pulls us in and makes us wonder how a young woman can change over time and end her life in a dramatic manner. The films power is in that while it explains, to some degree how the change happens, it also raises any number of questions that don’t have easy answers.  Watching the film at home I was left staring at the screen pondering what I had just seen. It’s the sort of film that you really need to see with someone, or with a theater full of people because when it’s over, it’s a film that  you are going to want to talk about.  Best of all even if you don’t “like” the film you are going to be forced to talk about it. Even if you don’t like it you are still going to have to wrestle with how you feel about what it is showing you.

As you can see I am not being very substantive in discussing the film, and that is intentional. This is not a film I can discuss in a vacuum. This is a film that forces my engagement with another person or people. I need to bounce my thoughts off someone and seeing the film alone at home makes leaves me wanting to ask questions and hash them out rather than simply stating my thoughts.

On a substantive level the film is a beautifully made and acted film. It’s a solid drama that, at least for me, is lost in the vital issues about radicalization and the feelings that bring it on.

Highly recommended. See it with a friend.