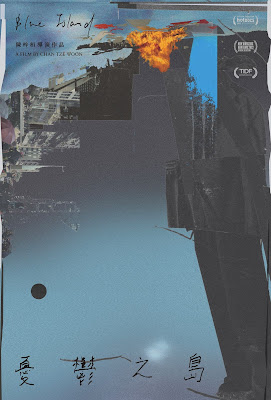 Tze Woon Chan's BLUE ISLAND will kick you in the knees and drop you to the floor. One part recreation, one part documentary and one part essay, the film is nominally a look at the protests in Hong Kong from 2019 and 2020, but the truth is the film is a mediation on the city and it's inhabitants and how both are being crushed by the Chinese government.
I am not certain where to start. Perhaps with the fact I was uncertain at the start. The film begins with a recreation of an escape from Mainland China to Hong Kong in 193 by a young couple. Its a recreation, as much of the film is, but it sets the tone for the long reach of the fetid finger of the Beijing going back decades. I wasn't sure what the film was doing with the recreation but I soon fell into the notion of the people being interviewed giving life to the past and the events that helped to shape them and their view of the world. Quickly my apprehension drifted away as I got lost in the talk of their lives, of their hopes and fears and the reality of life under an oppressive government.
To be honest I am having a hard time putting my thoughts in regard to the film into words. This was a film I felt on a visceral level more than an intellectual one. It's film where the the thoughts followed behind the feelings.
The power of the film is best represented by the long sequence at the end where Chan reduced the tragedy of Hong Kong down to a level on one to one. Tragedy is best understood hen it's personal and one on one. Chan achieves this by showing us the faces of the people arrested and their charges brought by the government. Its simply close ups of the people we saw in the film looking at us. It left me misty. It was a reaction that was earned, and reaction that burned the level of injustice deeply into my heart. Yes I knew it was bad, but in every other iteration it was distant-even if it was only arms length. In this final sequence, one that was built up to by the previous hour and a half the distance closes and we face to the face with the injustice because we are essentially reaching out to touch the a friend who is in danger.
I was rocked.
And sometime on I'm still processing, still trying to put words together to really express the power of this film.
Currently on the festival circuit, the film has played Hot Docs, New Directors New Films and will soon  play CAAM Fest 2022.
Posted by Steve Kopian at May 03, 2022