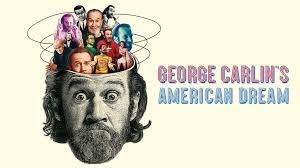 Two part, almost 4 hour, HBO documentary on the late great comedian is a good but wildly over long examination of the man, his life, his comedy and ind his influence.

A birth to death look at the man this is full of clips from his whole life, going back to his DJ days in the late 1950's up to his death. As a life long Carlin fan some of this was manna from heaven. There are a lot of things here that I had wanted to see or hear for years and I finally got to see them at last.

The film is also a record of a good portion of his comedy bits. All the HBO specials seem to be represented as are TV appearances and other shows. The film is a great overview of the arc of his comedy, though the film probably has too much of it since bits repeat, not always for a good reason.

What I love about the film is the fact it's a love letter to his first wife Brenda. Its absolutely clear that he would have seen unable to do what he did if not for her. It's also clear that his love for her was paramount and that even in the bad times (which the film never shys away from) she was the love of his life. We need a doc or film just exploring that relationship.

While I like the film I don't love it.  As I said above it is wildly over long (this would be great and less repetitive at two a and a half hours) and much too in love with its subject. I also wonder why it never probed certain areas of his comedy/psyche more. The angry man attitude he seemed to have is at odds with several bits, particularly the closing  where he speaks as if he is a loving father. I still don't think they managed to get the balance of the angry Carlin screaming  about all the that is wrong and wanting to watch world burn and the man who got up on stage after 911 and  was shaken when the world started to do just that. I mention this because he always claimed that what we saw on TV and the stage was the real him, which listening to people talk about him and to him in private recordings doesn't seem to be really the case.

In the end I was left feeling sad. I don't know why but instead of triumphant celebration about one of my "fathers" (Carlin's world view shaped me) the film left me feeling sad for him. He felt some how smaller. Yes, it celebrated the work, but some how I was left feeling as if he was just this sad old guy. He had this intellect, this way of making people think and  laugh but it was fueled by righteous anger that went no where.

Forgive me I was kind of hoping that my feelings toward Carlin in the last decade of his life, that he was a sad old man yelling at the kids to get off his lawn (see my piece here) would change. I wanted to find something to hold on to other than the words that have been taken to heart by so many to give up and be cruel to each other. So many people I know quote Carlin's admonishments that we're fucked as an excuse to not do anything and be hurtful. Yes Carlin was right because these people refuse to step up and even try to fix the problem even a little bit.

In the end my feelings didn't change, in part because Carlin isn't here to address the problem and mostly because the filmmakers didn't address it either.  Ultimately this documentary on a comedy god fails because in the end  the film about the man who challenged everything we think and do, and demanded that we challenge everything in our lives, never challenged anything he said or did.