Why I will never hear the new George Carlin album 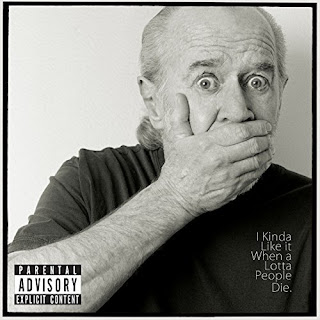 News of more material from George Carlin would normally be a cause from celebration  but this time out I don't care.  I don't think I'll ever listen to it.

Don't get me wrong George Carlin shaped my sense of the world and comedy. I loved his word play and how he revealed how twisted the world really was. I was warped by Carlin some where in the early 70's with Toledo Window Box becoming something I would quote endlessly. I got the albums, saw the HBO specials and saw him live. He made me laugh so hard I went light headed and almost passed out.

Thank you George I love you.

For a very long time he was one of my comedy gods.

However my love of Carlin shifted over the years. The love of word play gave way to the darker world view that we are screwed and that he wanted to sit back and watch the world burn. It was never the fact that he was tell us that we were doomed and that we were speeding toward destruction, rather it was the glee he seemed to express in numerous routines where he exposed the feeling I Kinda Like It When a Lotta People Die, which is the title of a new album. And then it went from liking the death and destruction to there would be nothing he would like more than to sit back and actually watch as the things burned.

The blacker he got the farther away I drifted. His bits genuinely were funny but there was a cruelty in them and a sense of savage despair that I really didn't like. Worse at times there was a sense that Carlin was painting himself as a dark anti-god or cult leader- There is no goodness and light there is only evil, and that if you weren't with him you were against him. While the us against them was not something that came across in interviews or reports from friends who spoke with him, the sense that he kind of really did want to see the world burn did.

Then I completely drifted away. I still watched the specials but only halfheartedly.

The truth is it wasn't that I thought he was necessarily wrong in his world view rather it was more a feeling that if he really felt that the world was that fucked up and that we were doomed he should be doing something to stop it and not rallying the troops for bad behavior.

I have no problem with anyone saying we are doomed or that something is wrong or anything else, but if you're not going to do anything more than complain and not make an effort to fix the problem then shut the hell up because by not doing something you are part of the problem.

In my eyes the public persona of Carlin had become part of the problem. I make that last statement since I had a friend say to me "why should I care about anything, Carlin says we're fucked" before he would do something or other reprehensible.

Now before you crucify me understand that yes I know it's comedy. Yes I know he was a comic, but at the same time his frequent HBO specials made him something more.  No, he never had to fix the world- he was there to tell jokes. However if  you spend several decades saying we're all doomed and you claim to want to watch it burn then there is something a bit more going on than a comic character.

The end of the world prophet always seemed closer to George.  If he wanted to watch the world die then more power to him, I'll just exercise my right not to listen to him.

And before you tell me "that wasn't George" you have to realize that the angry old guy was how many people saw him and it's how many people still see him because all they know is his specials. If there was less angry George most people don't know it because we never saw it and  his public persona took over.

Carlin was supposed to be on HBO shortly after the attacks and I was wondering what he was going to say. How would he react now that he got the world in flames that he always spoke about? Would he change things up? I was hoping that he would march into the flames and embrace them.

Instead Carlin waffled. He made some remarks about the tragedy that were out of character, and kind of wussie compared to the tower of anger that marked his hell fire persona. He then went on with a show that was funny but was toned down in the we are doomed arena and oppressing the brown people.

Yes I know it was a national tragedy. Yes I know he was a human being, but truth be told he had been calling for something like this with his jokes and in his interviews and when it came he balked,

To be honest I lost a great deal of respect for Carlin in that post 911 show.  Not because he toned down or didn't embrace the fire, rather it was no longer clear what he believed or who he was. Which is the real George, the I want to watch it burn guy or the guy who hedged his bets?  It was a feeling that grew deeper when in the shows that followed as he went back to the calling for fire and brimstone despite the fact that the 911 attacks clearly rattled him. Apparently he wanted to watch the end but not have it touch him.

I walked away and really have no desire to listen to most of his stuff.

Which brings me to the release of a new album of material from Carlin.

I had found out about the album when I heard Sirius/XM special on Carlin where people were telling stories about him. It was a very funny, very touching show that reminded me how special and important Carlin was and is, to comedy and free speech. The new album was going to be played after the special. I was thrilled except I had to get out of the car and go elsewhere. So I looked it up on Amazon and saw what the new material was...

The album is  what should have been the post 911 show. It was recorded the two days before the attacks. Supposedly its full of the piss and vinegar that the 911 show lost following the post attack rewrites showing how dark Carlin really was...

And with that revelation I suddenly had no interest. Not because I don't think it will be funny, rather I don't want to hear him talk about being doomed again, especially at a time where we have two candidates for president that are far from stellar human beings.

Yea George we're doomed and you're dead and the rest of us still have to deal with a world that is burning.  I understand you were trying to help us by pointing out how bad things were, but at the same time it would have been nice if you didn't take such glee in pointing it out. More to the point if you really wanted to watch the world die then you should have owned it when we stood on the brink.

I can only imagine what vitriol Carlin would be spitting at both Hillary and Donnie. Probably would be raging at the stupid things they've said and done. Of course he wouldn't vote because to him that only validated the piss poor choices we have- but whats the option just getting shit on? If you don't take part you can't change because you're not in the game.

Sadly his attitude has been picked up and shared by thousands of people who see the truth in Carlin's words so they stay home and watch it all go away while they get numb from the pain inflicted by the world they hate.

I completely understand that Carlin was an entertainer, a comedian, aand a social philosopher, but at the same time he has helped speed the fall. His words are quoted by nihilists and assholes everywhere.

Type in something about why we shouldn't vote and his words are there. Look up things anything about the negative aspects of life and you'll find Carlin quotes. People have taken his words to heart  and as such we're racing faster to the end. Morons and nudniks are not trying to stem the tide because of a witty aphorism from Carlin says there is no point

Hey George what would be a viable alternative? Any real ideas?

I know you made suggestions that if we all went off and lived our lives we'd all be okay, and I agree , But at the same time we just can't go off, we never could. The right answer would be to go back and not do the things that are speeding our end- but that's not happening- so we now have to find away to fix things

And in order to do that we have to do more than just stop and recount all the terrible things that you made a fortune recounting.We have to try and do something. He need to fix the flaws or die, not get drunk and complain and watch it all go away.

Yea George we're doomed, but hearing you say it again is pointless since as you know you're dead and life goes on.

Time to get up and  try tofix some small piece of the world
Posted by Steve Kopian at September 10, 2016

Email ThisBlogThis!Share to TwitterShare to FacebookShare to Pinterest
Labels: essay, not a movie