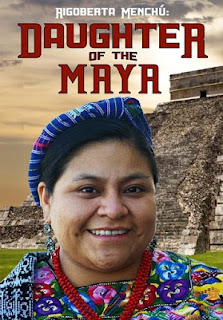 Portrait of Rigoberta Menchú Tum who won the Nobel Peace Price in 1992 for fighting for the rights of the indigenous people in Guatemala and South America.

This film was made as part of PeaceJam's Nobel Legacy Film Series the film is an okay look at a person most people have never heard of.  While informative the film plays more like the sort of film that you see in schools about famous people. Its full of talking points and information but it isn't the most compelling of films.

While the film is okay on it's own terms it's kind of puzzling as to what it is doing in a festival such as HIFF.  While the festival certainly is programming something for everyone, this is a film I can't really see as being drawing a either a big crowd or the crowd being thrilled by the film when it was finished. I would rather  have seen this film on PBS

One of the lesser films at this years Harlem Film Fest
Posted by Steve Kopian at September 16, 2016