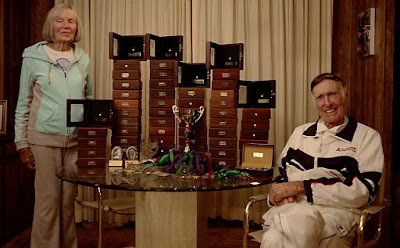 Impossible to dislike film is a loving portrait of a game and the people who play it with an undying passion. These guys and gals are an utterly charming bunch of people who maybe obsessed with one thing but manage to carry on doing what they love well past most people would have thought to give it up.

I completely understand the love these players have for sport and competing. My dad who is himself approaching 80 is still out there plugging away as best he can and seeing these other warriors still out there reminds me that this is what we should be doing and not the living death of retirement communities where we just plod along until we finally are planted. God bless them all.

An absolute joy of a film and possibly the feel good film of the Portland Film Festival.