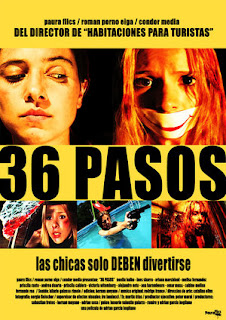 6 beautiful women end up in a house by the country where they are help captive by a crazy person who has strict rules they must follow.

Odd, occasionally, disturbing horror film from Argentina. Its a film that works because it plays with the rules of horror films in such away that at times you don't know what to feel or expect. Scenes play out in a WTF manner, seemingly brought in from another film, only to turn left suddenly and have a shocking resolution. I'm not sure if I like it or not but it kind of got under my skin in a way that will have me recommending it to friends who like atypical horror films.
Posted by Steve Kopian at September 09, 2016