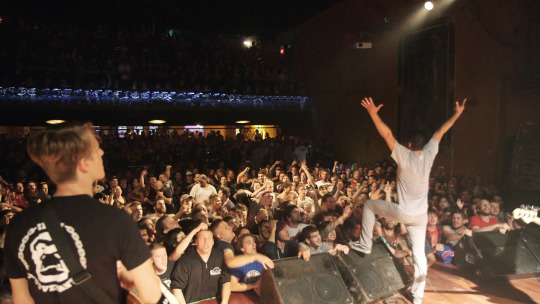 The group Misery Signals reforms after several years to tour to celebrate their first album as well as to try and mend fences and put the past that had involved in fighting and fatal car accident, behind them.

Solid music doc about a band of young men trying to recapture the past and go on. Focusing not on so much on the music but the guys in the band and their shared past, this is a wonderful look at what it's like to be in a band and trying to make one's way in the world. Its a great look at a bunch of guys who may or may not have grown up over the last ten years.

Actually that's a stupid thing to say because what makes the film work are the guys themselves, now no longer kids but young men with ten years of road dust on them and all the wear and tear that got them there. What starts out as a kind of lets follow the band film at the start turns into something special as the men all turn out to be eloquent speakers. They are so eloquent in fact that I stopped  watching the film and closed my eyes and just listened. This isn't a knock to the visuals, rather its simply that the words spoken carried a weight that made me want to focus on them

I really like this film a great deal and it was a real surprise that I ended up liking it as much as I did.

I'm trying to work out if the film transcends its subject to be something more universal or not. I think perhaps it does...

The film world premiered last night at the Portland Film Festival and is one to track down.
Posted by Steve Kopian at September 01, 2016