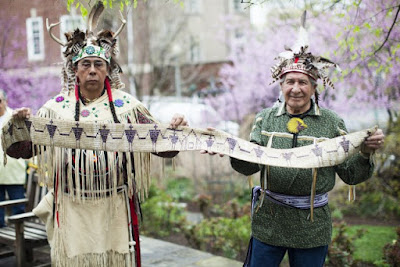 A portrait of the Onondaga Nation in upstate New York which is battling to regain some say in how the land that they once controlled is used as well as to pass on their culture to a younger generation.

This is a good look at a native American nation fighting to to do more than survive and instead actually make a difference in the world. As one of the chiefs says "we don't want to take the land away from those who are living there, that is something we know. Rather we are looking to have a say in how it is used so that it is protected from harm." That's also something they know since Lake Onondaga, one of their sacred sites is now so polluted you can't touch the water with out some form of protection on.

I really liked this film a great deal. Its nicely made look at a people and a subject that most of us don't really know, I mean most of us don't know what it's like to be a native American nor do we even remotely understand that they really are essentially another country inside of this one.(The discussion of treaties is wonderful)

I suspect that this film is going to have a life well beyond the festival screenings at Portland and elsewhere.