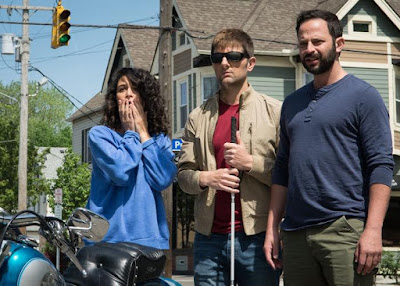 When I saw My Blind Brother at Tribeca earlier this year I thought it would have been one of the best films of the year except that Robbie, the blind brother played by AdamScott is such an incredible dick that I didn’t want to write it up. Robbie was such a turd that I wrote a paragraph and went on to the next thing.

My Blind Brother is for the most part a winning, charming, romantic comedy. It’s actually one of the best you’ll see all year. The problem is that one part of the romantic triangle at its center is the sort of person you’d lead to an open elevator shaft and let them fall to their death and never have an ounce of remorse about it.

Robbie is a champion swimmer despite being blind. His brother Bill is his aide and because of his help Robbie can do the wonderful things he does. Bill lives in his brother’s shadow. Robbie is thought to be great and wonderful but is really a boorish prick running rough shod over everyone especially his brother. When Rose appears Bill thinks he finally has found someone to love however, his brother gets involved and a romantic triangle forms.

As I said the problem is Adam Scott is much too good playing a terrible individual. Yes we have a person we can root against but he’s so terrible you don’t want to have anything to do with him. I wanted to slowly drop him into a chipper shredder and stop periodically and squirt lemon juice in his wounds. He’s one of the great screen villains.

My dislike was so strong that I got up and walked out of the theater the first time I saw the film- I simply wanted nothing to do with him.

Seeing the second time I found that my hatred for Robbie softened slightly but I still really hated him. In fairness Adam Scott gives one of those performances that Oscar should recognize but won’t partly because he is so terrible and second this is a light weight comedy…

…and there is nothing wrong with it being a light weight comedy- I mean it’s entertaining-more so than most of the big films that Hollywood has turned out. It’s a warm and fuzzy rom com that feels right. It’s the sort of twisted situation I could see happening in a less intense chain of events.

Dspite my dislike to for the blind guy, I highly recommend this film. This is one you’re going to be watching evey time it hits TV
Posted by Steve Kopian at September 19, 2016