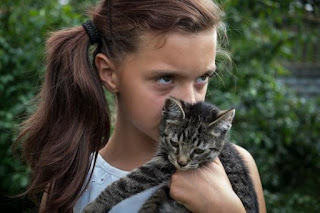 TWO WORLDS
Award winning documentary about Laura, a 12 year old girl with deaf parents. Mixing home video footage with recently shot film of the families day to day life TWO WORLDS paints a portrait of  how people with a handicap and their families deal with the world.

Unsensational, matter of fact and deeply affecting TWO WORLDS makes it clear that life is rather ordinary no matter who you are. While Laura most definitely has to help her parents by acting as their ears and voice, she is ultimately just a regular young girl interested in music, boys and her friends.

This is a lovely film and a must see at the Harlem International Film Festival.

WEST COAST
Four white kids in Brittany in France identify with West Coast rappers and have formed their own posse When the leader of their group is dised right after he finds out that he is going to have to move away the group plots to get revenge as their last act together.

Good, but more interesting for the attempt rather then the actual execution film is like an old school coming of age film but with sweet white kids who think they are gangstas.  Its an odd mix of a film like KENNY AND COMPANY, STAND BY ME or to some extent GOONIES but with rap music and lots of four letter words. The sweetness is kicked in the balls by the profanity and it doesn't quite work as well as it should. I think the problem is that we never really buy the boys as gangsta wannabes.

Its not a bad movie, if you forgive its flaws its actually quite good, the problem it never quite comes together it's neither sweet enough nor gritty enough to amount to the great film it almost is.

Worth a look for the curious.
Posted by Steve Kopian at September 17, 2016