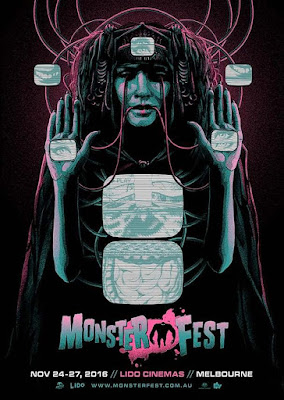 In conjunction with the festival, Monster also announces the return of the Monster Academy - now dubbed The Swinburne University Media and Communication Monster Academy – a two-day industry conference that takes place Nov 23 and 24th, running up to the festival itself.

We are pleased to announce that veteran director Ted Kotcheff will appear in person to present the film that many critics regard as the greatest Australian film ever made, his 1971 outback classic WAKE IN FRIGHT, as well as screenings of FIRST BLOOD (1982), WEEKEND AT BERNIE’S (1989) and SPLIT IMAGE (1982), the latter as part of our previously announced all-night Cult of Monster marathon.

Kotcheff will also be the keynote speaker at the Swinburne University Media and Communication Monster Academy with a three-hour masterclass on Thursday Nov 24th. A limited number of tickets are now on sale for the masterclass HERE: >> https://www.trybooking.com/227339

We’re also excited to announce that Sundance WTF sensation THE GREASY STRANGLER will be our Closing Film followed by a GREASY GALA with the two stars of the film, special guests Sky Elobar (Big Brayden) and Michael St. Michaels (Big Ronnie – the Greasy Strangler himself) in person! The premiere of the film The Guardian called "a playful oasis of filth and depravity" and Empire called “one of the best movies of 2016” will be accompanied by a nationwide tour with the stars in attendance for special event screenings, “Greasy Disco”, themed drinks, “Hootie Tootie Disco Cutie” contests and various oily hijinx. Grease is the word!

Weekend passes to Monster Fest are on sale now for $199 AUD. This includes access to all screenings and events at Lido Cinemas from Nov 24-27, including the Opening and Closing Parties and the all-night Cult of Monster Marathon. Individual Day Passes are also available for $65 AUD. Passes are available now on the Lido website HERE: https://www.lidocinemas.com.au/Promotion/Monster-Fest-2016-At-Lido

Please note Monster Academy Passes and tickets are sold separately and will go on sale when the full Academy lineup is announced in the coming month.
Posted by Steve Kopian at September 02, 2016