A non-review of THE REMNANT (2016) Harlem International FIlm Festival 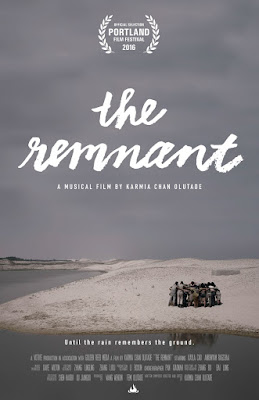 Karmia Olutade's THE REMNANT is impossible for me to review. Watching it I was instantly struck that this musical is either going to be your favorite thing in the world or it's going to be a tough slog to the end. You either will fall in love with it's music and it's visual style that reminds one of Norman Jewison's JESUS CHRIST SUPERSTAR set in a barren dystopia or you'll get up and walk out of the theater.

The plot has bunch of orphaned kids living in an orphanage that is really a second hand water factory. They run off  to try and find the home that they always dreamed of.

Part Biblical allegory, part dystopian scifi tale, part off Broadway musical the film very much insists on being it's own thing. You have to give the film points for going it's own way, of casting all Asian actors, and simply existing.

The problem is that if you don't love the music, there are 18 songs, and the dance, there are 18 songs, then you're going to find this impossible to get through. I didn't care for either and had a tough time caring about anything.  For me the songs all sounded too similar, with the same deadly serious emotion behind them, while the dance was the sort of thing I point out as the reason I hate going to see modern dance recitals. The film also takes a sledge hammer approach to it's story and point. (remember I said the film is biblical in construction.)