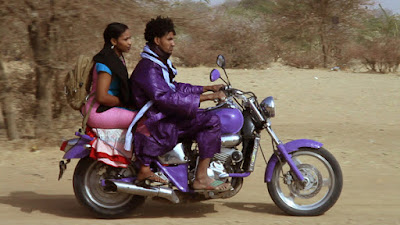 The Opening Night film of the Harlem International Film Festival is a fictional story about the Taureg guitar culture. The has guitarist Mdou Moctar playing a version of himself in a film about an artist having to fight his family, his lover and life in general just to find a place where he can make his music.

Yea you've seen this before. If you like Hollywood musicals you've probably seen any number of variations on the films basic plot, so on that level the film isn't anything new. I mean the title and much of the imagery is a homage to PURPLE RAIN, so you'd have to be kind of blind not to realize going in that there is some manipulation of cliches going on here

However unlike PURPLE RAIN and most of the other Hollywood films referenced, RAIN THE COLOR BLUE WITH A LITTLE RED IN IT has to things going for it- first it all feel real. I have no idea how many people in this film are actors, but it doesn't matter because while the situations feel well worn there is something about the performances that makes it all feel real, The film feels like real people doing real things the way they would even if the camera wasn't rolling. Its something every film strives for and almost none ever manage to get- even the best of the best

The other thing this film has going for it is the music. While the film runs 75 minutes, I suspect that 70 minutes of them are ful of music, either full on performances by various bands or by guitar riffs that drift under the images and carry us long. It feels like a jam band just jammed for an hour and we get to be carried along.  To hell with John Williams or whomever ends up with the Oscar this year, the ones that deserve it are the guys  who wrote the music that powers this film

Seeing this film was one of those "holy crap I can't believe what I'm seeing" moments. Its one of those glorious times when I see a film that rocks my world and I get to go out and try to get people to see it. Its one of rare times where I feel like I'm getting in on the ground floor of something really good and really special. I'm not going to lie and tell you its perfect or even great- but at the same time its alive,and it breathes and it dances and it makes the audience want to get up and dance or if not dance sway to the music.