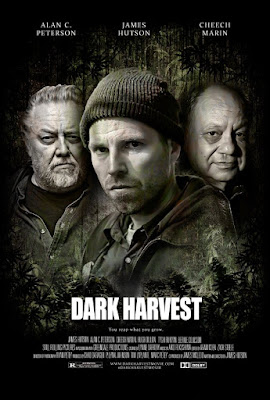 Marijuana grower Carter end up forcibly having to work with a cop he injured a year before when one his friends is murdered.

World premiering last night at the Portland Film Festival DARK HARVEST is a neat little crime drama that really shines thanks to writer, director and star James Hutson skillfully stringing us along and not taking the easy road in plot resolutions. I'm not going to lie, Hutson is a very talented man. Taking what should have been and what could have been a by the numbers B story, he has pumped it up with some really nice twists.

While Hutson's own character isn't the most compelling in the film  he has surrounded him with some awesome characters. Cheech Marin proves he's an under valued actor with his turn as Ricardo, Carter's friend. Its a role that in a bigger budget film would have gotten Marin an Oscar nom because he is so perfect that it doesn't seem to be acting. Hutson has also crafted a complex role for AC Peterson, who plays the cop whose police career was derailed by a bear trap in Carter's office. He is not a guy you like, but by the end of the film you do come to respect him.

Hutson's staging of the films sequences is nicely handled. Its so well done I wanted to see what else he had directed and was shocked to discover he'd only done a documentary previously. How the hell can some one be this assured and this agile with crafting suspense the first time out? More importantly what will he do next and where do I line up to see it?

As many of you know I see a great many B thrillers and some are good and some are bad and some are best left unmentioned. It is a rare occasion when I see a film, which manages to knock my socks off not just because it's an entertaining film but also because it's writer/director/star constructs a confection of such promise that one can't help but think that this is going to be the first of many kick ass films.

See this film when it rescreens tomorrow. For tickets and more information go here.
Posted by Steve Kopian at September 03, 2016