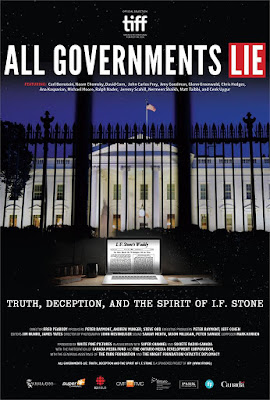 It's a sad thing that most people have no clue who I.F. Stone was. Stone was a champion of a free and unfettered press who told it like he saw it with an acerbic wit and razor like words. With in the small confines of his weekly publication he did a great many things, usually showing just how big a liar the government was simply by using it's own paper trail against itself.

Highlighting the journalists who have taken up Stone's fight and living by his mantra that all governments  lie, this film takes a look at where the good fight is being waged these days. Its a hopeful, yet sad look at the news industry that is getting more and more away from the things that matter and replacing it with the thought that a Kardashian wedding is a major news story.

Looking at  several journalists as they go through their paces - Rolling Stone's Matt Taibbi goes after Trump in the early days of the election; Glenn Greenwald, Jeremy Scahill and Laura Poitras set up Intercept Media; Democracy Now broadcasts its commercial free news and John Carlos Frey investigates the story of a mass grave found in Texas with 200 bodies of illegal immigrants in it- the tip of an iceberg to the possible death of 10,000 people from Mexico alone who have gone missing on their way to America- the film makes clear that news media today is a money making entity and will do what it has to turn a profit. Most main stream media wants to turn a profit with the result that they are not properly vetting their sources such as ex-military people who are still paid by the military to get their points across.

ALL GOVERNMENTS LIE is a film I feel very mixed about. While I love that the film highlights the alternative media to the mega corporations, I hate that the film feels a tad scatter shot (or at least oddly put together).  The film throws so many balls in the air that it keeps jumping from one to the next. Threads are started in the middle, what exactly is Intercept media and who are the people behind it other than having something to do with Edward Snowden? John Carlos Frey is who? If you don't know the alternative media you may not really know who they are. Even I.F. Stone, nominally the uniting force of the film gets the short end as it isn't until we are a good way in to the film that we get any idea who he really was other than a mythic figure.

There were times when I wanted to stop the film and call up director Fred Peabody and ask him why he didn't explain things better at the outset and why he jumping from one subject to the next. I was frustrated that some of the threads, particularly the stories the reporters are working on weren't fully on the screen. I do understand that often the subject- say the mass grave of 200 bodies- wasn't the focus of the film, but at the same time you're devoting enough screen time to it, or giving us enough details that we get hooked.

I like the film, I genuinely do but I'm not sure who the film is for or where it's going to end up. I think the film suffers because it's very much like the previous work of director Peabody, TV documentaries of the Unsolved Mysteries or Modern Marvels sort. That isn't a knock on either (I have both on DVD) rather it's more an indication that there isn't as much depth to the subjects covered as there should be.

While I like the film, its one of the better looks at the divide between the media outlets, the film is probably too much a political film with a very set agenda.  I'm not sure how the film is going to play outside of a predetermined audience- namely those who lean to the left (the early attack on Trump will drive the conservatives from the theater) and distrust the government (though the film essential says everyone is lying to us other than the sources shown here). This isn't to say that the film won't find an audience rather I don't think it's going to change any hearts and minds.

The film world premiered at Toronto and has  additional screening tonight, Thursday and Saturday. It's Oscar qualifying run begins on November 4 in New York and in Los Angeles
Posted by Steve Kopian at September 13, 2016