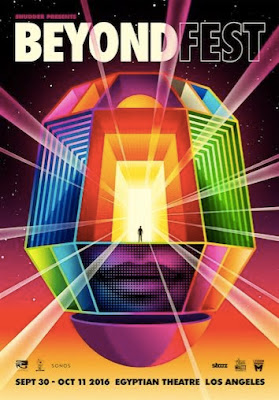 With a diverse slate that includes films from all corners of the globe Beyond Fest is proud to open with movie icon Paul Schrader presenting his new feature DOG EAT DOG and a special 40th anniversary screening of TAXI DRIVER. Other hotly-anticipated titles making their West Coast bows include the hyper-explosive coming-of-age cannibal drama RAW, Ana Lily Amipour’s much-anticipated follow up to her alt-cult debut, A GIRL WALKS HOME ALONE, the stunning, sonic desert trip THE BAD BATCH, the terrifying adaptation of M.R Carey’s post-apocalyptic horror THE GIRL WITH ALL THE GIFTS, and the Mo Brothers’ outrageously hyper-violent action epic, HEADSHOT.

“We really wanted to focus on blending the iconic with the emerging this year” said Beyond Fest Co-Founder, Christian Parkes. “To champion brilliantly provocative films like Julia Ducourna’s RAW and Ana Lily Amipour’s THE BAD BATCH whilst celebrating established heroes like Paul Schrader and Kurt Russell is a primary reason for Beyond Fest’s existence.”

The most beloved genre films are highlighted with four event screenings over the course of this year’s festival. The legend himself Kurt Russell takes center stage with James Gunn moderating for a very special 30th anniversary screening of BIG TROUBLE IN LITTLE CHINA projected on glorious 35mm. The “ultimate trip” receives the ultimate treatment as Stanley Kubrick’s existential epic 2001: A SPACE ODYSSEY screens in 70mm with a 2001-scored Laserium cosmic laser concert and Q&A featuring the film’s two astronaut leads, Keir Dullea and Gary Lockwood. The Tall Man returns with J.J. Abrams’ Bad Robot meticulous restoration of Don Coscarelli’s cult classic PHANTASM: REMASTERED. Coscarelli will be joined with members of the original cast before the West Coast premiere of the series’ final entry PHANTASM RAVAGER. In keeping with the restoration theme, producer Richard P. Rubenstein will be on hand to present the U.S. Premiere of DAWN OF THE DEAD 3-D. Romero’s cult nightmare has never looked better and will be the first laser 3-D feature projected at the famed Egyptian Theatre.

Once again, music features prominently with two seismic re scores taking center stage. Furiously blurring the lines between music, film and art, Beyond Fest welcomes a new disciple and an old friend with two seismic re scores. Director, producer, actor, Wu Tang Clan founder and the all-together mythic RZA enters the fray with a roundhouse kick for his epic takedown of a martial arts masterpiece. 18 months in the making, RZA: LIVE FROM THE 36th CHAMBER OF SHAOLIN is a mammoth live re scoring of Lau Kar-leung’s Shaw Brothers classic featuring over 40+ tracks culled from RZA’s monumental catalog. Instrumental tracks, beats, samples and vocal tracks amplify the narrative and Gordon Liu’s revelatory performance.

Returning to Los Angeles is legendary composer Fabio Frizzi and his seven-piece orchestra to perform THE BEYOND: COMPOSER’S CUT. This bold, new take on Lucio Fulci’s gothic masterpiece features a live re score featuring a completely new composition and will play with all original dialog intact. THE BEYOND: COMPOSER’S CUT will be accompanied by an uncut 35mm screening of GATES OF HELL and a very special secret screening with surprise guests.

Celebrating LA filmmaking remains a priority for Beyond Fest with Ti West receiving this year’s ‘LA Spotlight’ for his transformative western, IN A VALLEY OF VIOLENCE. Beyond Fest alumni West will be joined by cast members Karen Gillan, Taissa Farmiga, Toby Huss, James Ransone, and the film’s four-legged star, Jumpy. LA also represents en masse with a midnight blast of animated anarchy as Chris Prynoski’s NERDLAND also gets its LA premiere. The first feature from Prynoski’s Titmouse Animation Studios is a wild descent into LA’s soul-destroying entertainment industry and will feature director Prynoski, writer Andrew Kevin Walker, actor Patton Oswalt, plus others in attendance.

Beyond Fest welcomes the return of genre streaming platform Shudder as its Presenting Sponsor, a partnership that provides 13 screenings (9 West Coast premieres) absolutely free to film fans. Every night, the 90-seat ‘Shudder Theatre’ will feature a brand new film selected from across the world including

Emile Hirsch’s super creepy THE AUTOPSY OF JANE DOE, Japanese scare-fest SADAKO VS KAYAKO, Morgan Spurlock’s stomach-churning doc RATS, the revelatory Kubrick doc S IS FOR STANLEY, the hands down craziest film of the year THE DWARVES MUST BE CRAZY, and two Cinematic Void double bills featuring a premiere screening of Arrow’s 4K restoration of Romero’s THE CRAZIES paired with MARTIN on 16mm and an American Genre Film Archive fundraiser featuring a 35mm monster mash up of NEON MANIACS and STREET TRASH.

If that wasn’t enough, virtual reality engulfs Beyond Fest for the first time with Dark Corner Studios showcasing three of their most terrifying experiences. Led by wunder-director Guy Shelmerdine, guests will be able to watch his breakout VR horror smash CATATONIC, in addition to his new film MULE and Justin Denton’s BURLAP. The Egyptian Theatre will be housing Dark Corner in the hidden reaches of its 90 year old architecture.

See below for the full lineup of newly announced film titles for Beyond Fest 2015.


ATTEND BEYOND FEST:
Tickets for Beyond Fest 2016 are will be made available for purchase through Fandango and the American Cinematheque on September 8th.


Beyond Fest
Beyond Fest is the highest attended genre film festival in the U.S. and exists to build the genre community in Los Angeles. Based out of Hollywood’s legendary Egyptian Theatre, Beyond Fest is built in partnership with the American Cinematheque, Meltdown Comics, Death Waltz Recording Co. and the Alamo Drafthouse’s, Fantastic Fest. A not-for-profit entity, Beyond Fest raises funds for the 501C3 non-profit film institution, American Cinematheque. Its favorite film is JAWS.

Death Waltz Recording Co.
FOUNDED in 2011 by music industry veteran Spencer Hickman, Death Waltz Recording Co. have been at the forefront of the vinyl soundtrack resurgence. Working with directors and composers such as David Lynch, Richard Kelly, John Carpenter, Fabio Frizzi, and Steve Moore to produce definitive versions of classic soundtracks to films both old and new. Recently venturing into both digital and CD territory DWRC remain the leading lights of the soundtrack scene . In 2015 DWRC joined Mondo Tees and Hickman now runs both The Mondo Music Label and DWRC.

Meltdown Comics
Located in the heart of Hollywood on Sunset Blvd, Meltdown opened in 1993 and has since become one the most respected comic book stores in the world. Taking a sophisticated approach to merchandise and operations, the 14,000 sq ft giant has garnered a reputation for hosting successful gallery openings, award winning comedy including the Comedy Central’s The Meltdown with Jonah and Kumail, live shows and podcasting events in their collaborative space with Nerdist and the NerdMelt Showroom.

Not content with LA Weekly naming us one of the “Top 50 things why LA kicks ass,” Hef’s Playboy Magazine named us a “top 10 store you must visit before you die.” Oh, and "Husbands and Knives,” the 7th episode of The Simpsons' 19th season… The lead segment is based on us. (Google it.) 'Nuff Said!

Shudder
Shudder is a diabolical new premium online video service, serving horror fans with curated worldwide programming ranging from hard-to-find independent fare to cult grindhouse classics to Hollywood blockbusters. Shudder has something for everyone, from the casual fan to the hardcore horror devotee. Backed by AMC Networks, Shudder is curated by horror aficionados with a deep love and respect for the many peculiar varieties and genres of horror.

Email ThisBlogThis!Share to TwitterShare to FacebookShare to Pinterest
Labels: Beyond Fest