Among The Believers opens Friday 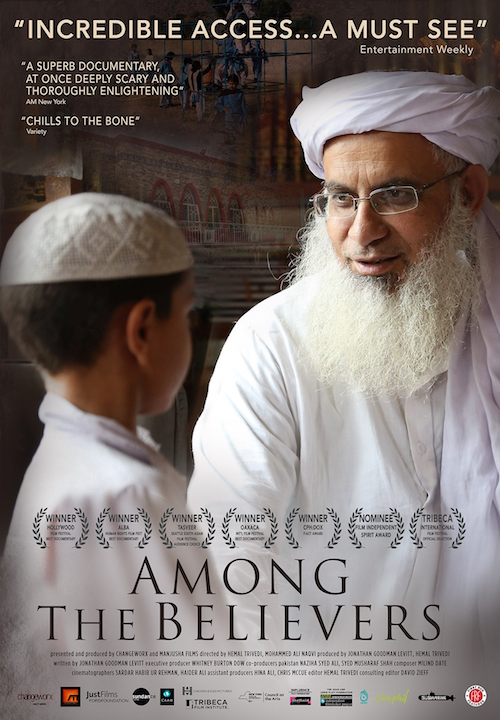 Disturbing look at the religious extremism that is being fostered in the Red Mosque in Pakistan. Shot in part inside the carefully guarded mosque the film shows us Maulana Aziz, as he prepares for a holy war not only in the country but across the world. We also see inside the madrassas, the religious schools, run by the mosque where children memorize the Koran all day.

Showing another facet to Pakistani life like FIGHT OF THE FALCONS or EVERY LAST CHILD, this film is a punch in the gut. We see how the cause is perpetuated thanks to the teaching methods which are a form of mind control and to parents who turn their kids over to the zealots, not because they believe but simply the teaching is free and offers their kids a chance at least one good meal a day. Its a chilling thought that the need to feed your kids is turning them into mindless killers.

I was moved by the film, though having sat through the two films I mentioned above I was very aware of much of what the film has to say-but I was also deeply disturbed for while I knew what was happening, I never really understood that even the leading voice for this kind of thought refused to fully explain why he believes what he does beyond its the law. Its clear he doesn't have a good reason for it since despite the fact they are having the children in their care memorize the Koran they aren't telling them what it says- its in Arabic and they speak Urdu- a fact made plain when one of the students says he has no idea what he's memorizing.

A good many of the people in the audience of critics were so bothered by the film they sat shell shocked by what the film showed. Many people left the theater when it was done despite having had plans to see the rest of the days offerings, they simply had to get out into the daylight and a place where armed people wren't trying to suppress the masses. Those that stayed ended up in deep discussions about how this sort of extreme hate could be stopped.

A must see film for anyone who wants to know where some of the religious discord is coming from.
Posted by Steve Kopian at September 26, 2016