Escape from Hellhole (1983) (also released under several other titles) 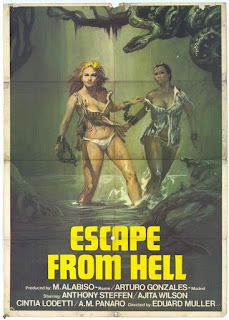 This is a review of mine that was deleted from IMDB for reasons I'm unsure of.

Women are kidnapped or tricked into going to a mercenary camp where they are used as sex slaves for the men in training. After much torture and sex and violence and nastiness the women break free and a huge gun battle ensues.

Jaw droppingly insane this is the sort of film that they never made in the US which means it has to come from tsomewhere else- or in this case the Philippines. Wild wanton and wacky this is the sort of wonderful bait a switch "I can't believe I'm watching this sort of movie".

Far from the best film in the world its the sort of thing that forces you to admit you've seen something. Its the weird and wild stream of films like this that kept people going back to the grindhouse week after week. Worth a look for those who want to see what a real grindhouse film is like (as opposed to the Tarantino/Rodriguez versions) If you like the weird and the off beat you must see this film
Posted by Steve Kopian at September 08, 2016