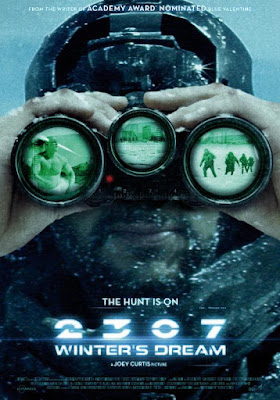 Three hundred years in the future when the world had been frozen solid after a meteor strike man has retreated under the snow and the ice. With not enough people left the scientists have manufactured humanoid workers,mules because they are biological creatures unable to reproduce, to do the heavy lifting. However one named Ash cut a baby out of a woman's belly and ran off to start a rebellion. Five years later, Commander Bishop, father of the baby, is pulled out of his drug addled haze and asked to lead Spartan Seven team to track down the rogue Ash. Of course nothing is as it seems.

This is a kind a of pulp science novel of a film. Like the thousands of cheap novels turned out by genre publishers 2037 is a film that borrows all sorts of plot elements from all sorts of sources (BLADE RUNNER to begin with) to make an enjoyable hybrid that is entertaining. I mention  pulp novels because  I could run a long list of other science fiction films that 2307 borrows from, I'm mentioning it up front because that's going to be the first thing you notice. Frankly the film has so many references in plots and visual echoes, that any science fiction fan is going to find it somewhat distracting, at least for a while. Its a kind of scifi's greatest hits and it's hard not to tick off the references in your head. However once you get about 20 minutes in and the cast ends up on the ice you get caught up in the action and the story as the film skates along at a fast enough clip that you stop counting the references and just ride to the end.

And once the film is in motion 2307 is a solid little science fiction action film. Yea the film is riffing on other films, but at the same time its carving out a niche for it self because it becomes compelling and entertaining. You really do want to know where it's all leading to. Hat I like about the film is that while I could guess where some of it was going there were a number of twists I didn't expect which made it a nice surprise.

Best of all as the film went on I forgave the films early short comings. The low budget worked to the films advantage since the world outside is so low tech it makes sense.  Even the uneven acting of a couple of actors stopped mattering as the performances became character traits.  In the end the only thing that I couldn't forgive is the overly emotive reading of the narration which tries way too hard.

The best thing about this film is I actually want to see it again, I've also actually shot off a couple of emails to friends to keep an eye out for it.

As I've said the film isn't perfect, but its like one of those pulp novels, it tells a good story, transports you to another world and keeps you turning the pages until the end. The best thing about it is it will entertain you make you feel like you haven't wasted your time watching it. Tagging along as Bishop and his team chase Ash across the ice is most definitely a trip worth taking.

I expect it to have a long life after that.