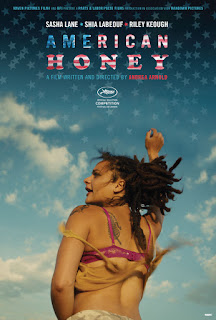 I don’t think I’ve ever seen a road movie less interested in sweeping vistas and exteriors than Andrea Arnold’s American Honey. Road movies, particularly ones set in the American midwest, are obsessed with widescreen panoramas, pastoral landscapes, helicopter shots of cars snaking their way up and down lonely highways. But there’s only one moment of such beauty in American Honey: a roving magazine sales crew of rowdy, dispossessed teenagers stop by the side of a massive network of gulleys stretching far off into the distance. The camera holds for a moment on this geological wonder before panning over to see the teenagers pissing and squatting next to the ridge. The film is obsessed with intimate close-ups, the average frame lingering on a single body part or detail: a shoulder, a neck, a hand; a window, a mattress, a cigarette. Sex scenes are shot with the camera mere inches from the performers; during one such sequence cinematographer Robbie Ryan noticeably racks focus several times in a single shot. We only see the outside world through the windows of their communal van as it races by in 1.37:1 snapshots.

It’s very easy to describe what happens in American Honey, but not so much what it’s about. It follows Star (Sasha Lane), a young woman who escapes an abusive relationship and a living picking expired food from trash bins to join up with Jake (Shia LaBeouf), a dashing, scruffy young man who shepherds a crew of salespeople across the country. They’re a makeshift family of nobodies and outcasts, teenage stoners and twentysomething drunkards. Each comes from a different state, each has a different story. My favorite was Pagan (Arielle Holmes), a young woman obsessed with Darth Vader who never seems fully awake even while hustling magazines. They have their own rules and rituals—the lowest two sellers of the week have to fight each other as punishment—as well as a hierarchy. At the top sits Krystal (Riley Keough), a white trash matriarch with no qualms about abandoning low sellers on the side of the road. It’s a harsh, thankless life selling magazines to people who don’t want or need them. But when the evening comes and there’s nothing to do but drink and laze about, it all seems worth it.

While shooting the film, Arnold and her cast and crew traveled nearly 12,000 miles across America, shooting bits and pieces of footage here and there. The entire film feels of calculated improvisation—during an interview LeBeouf admitted that he had no idea what was in it. The looseness lends itself to set pieces, some of which work better than others. The best involves Star giving an oil worker a handjob in the front seat of his truck in front of a flaming oil derrick. Most lesser films would kill for a sequence of such poignant beauty and power. The worst sees Star get picked up by three elderly men dressed as cowboys who take her to their pool for steaks and whiskey. The tone is all over the place—what are their intentions? Why are they all dressed like Roy Rogers? The sequence speaks to one of the film’s major weaknesses: for a film about America by a British filmmaker, it sometimes feels too on-the-nose with its metaphors. Watching the cowboy scene, all I could think about was how the world would react if an American filmmaker went to England and shot a scene where a young woman was picked up by a trio of Cockney chimney-sweeps. There’s a lot of heavy-handed, groan-worthy dialogue about “seeing America” and personal dreams. In seeking profundity, these scenes trip over their own pretentiousness. The film’s best observations of the States comes when it isn’t explicitly trying to say anything at all: the desperate poverty of post-industrial communities, endless strip malls and gas stations, ubiquitous drug abuse.

The film clocks in at a staggering 163 minutes, and though you feel its length, you never feel bored. There’s a curious momentum in its complacency; scenes of quiet and stillness seem propelled towards some end. But I left American Honey wondering what it was trying to say. As we left the theater, one of my fellow critics muttered that he never understood what Star wanted. That’s easy: she didn’t know. At times she seems to want Jake, their repeated hookups being the most obvious evidence. But no, a man would explain why she joined their crew, not why she stuck with them. The film has no answers. Indeed, one wonders if it asks any questions.