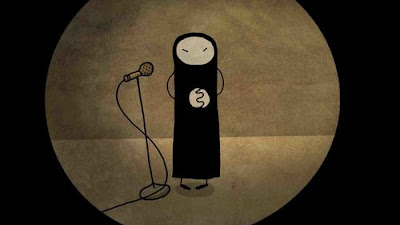 We can not choose our lives but we can shape it.

Rosie Ming is a half Chinese, half Persian young woman living with her Chinese grandparents in Canada, her mother having died and her father long ago disappeared.  Rosie is a self published poet who mysteriously ends up invited to a poetry contest in Iran. She would rather go to Paris, the place that inspired her poems and where she's never been, but she goes to Iran anyway and finds that what she knows about life, and her life in particular, is not really what she was told or thought.

Based upon writer director Ann Marie Fleming's graphic novel WINDOW HORSES is a stunning visual achievement with a kick in it's tail that will make you misty. The film is a beautiful mix of traditional animation that blends various visual cues to create a work that is a wonderful little jewel of a film.

This is an excellent example of what happens when you have a director who trusts her audience to follow her cues and eclectic storytelling style. Beginning with the differing designs for characters- Rosie is a stick figure who ends up wrapped all in black in transitional garb she is in many ways the least interesting thing on screen, but the simplicity draws your eye to it. Rosie maybe the most simply drawn character but she is much richer than we can imagine. Watch how here physical changes mirror her internal changes.  Fleming manipulates what you feel about what is happening by simply changing the visual cues. Rosie is very black and white and simple, at least to start. The rest of the world is more realistic than the line drawings of our heroine.

But things change as the film goes on. The film takes on further complications as the poetry and even conversations cause what we see to morph into differing styles of animation and even become more fantastic all in the drive to create a mood. Its a grand "no duh" trick that seems obvious, but it's one that most filmmakers never choose to do. Filmmakers painfully lock themselves in one style and one way of using visual cues for fear of losing or alienating their audience,  Fleming boldly does what the best animators like Isao Takahata  do and that is use the style that best illustrates that sequence, thus adding power (see Takahata's PRINCES KAGUYA) 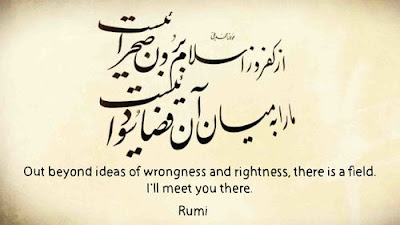 One of the joys of the film is the running dialog of the characters about why and how they create. The poets in the film are constantly talking about why and how they make their art- with Rosie saying one of the most brilliant things when asked about her training and knowledge of poetry and she simply says she has no training and no sense of history, all she has is this desire to create and express herself via poetry. She is admonished by one her hosts who assures her that she is indeed a poet. Its a magical moment that lets everyone, regardless of who they are and regardless "training" know that they too can make art. You simply have to express yourself - which is something more people need to be told and more people need to feel they can do

While the films story is simple, and at times cliche, I mean its pretty clear that Rosie will have a life changing event involving her family, what happens remains absolutely compelling from start to finish. We care about the story because we care about Rosie and the other beautifully crafted characters. Additionally while the overall arc of Rosie's adventure is predictable to large degree her interaction with the characters is not. How things play out and how characters behave is not always what we expect- there are no villains other than perhaps Rosie's sense that she can't do something.

If the film has any real flaw is that a couple of times the film stops the narrative to tell us extended histories of the lives of poets. While it adds meaning and resonances to Rosie's tale the handling is a tad clumsy and the film kind of tops for sequences, that while good on their own terms stop the narrative thrust of the tale. 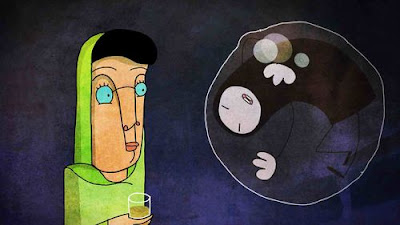 On the other hand it ultimately doesn't matter because by the time the film ends you'll be getting a tad misty by the turn of events and the lives of the people involved.

Very recommended for anyone who feels the urge to express themselves (as well as animation and graphic novel fans), this is a film that is going to have a long life after the festival circuit where it's magical message about life and creating poetry will resonate with generations of people now and for years to come. (Yes at times it really is that good)

The film is currently screening at the Toronto Film Festival.


Window Horses (Trailer) from NFB/marketing on Vimeo.
Posted by Steve Kopian at September 11, 2016