Anthony Banua-Simon's CANE FIRE is damn near close to a perfect film. Everything it needs to be a truly great film is there, except for the editing. As much as I like all of the pieces, I really wish someone other than the director had put the pieces together.

CANE FIRE is the story of  how the island of Kauai is portrayed in the movies...and it's the story of director  Banua-Simon's family on the island... and the history of Hawaii... and the history of labor relations and strife... and an effort to find the lost film that had his grandfather in it... and the relationship of the whites to all the ethnic people that lived on or were brought to the island to work... and how tourism and Hollywood warped history... and how no one can really live in Hawaii unless they are really rich....and three or four other thing which I have forgotten but which are covered in detail.

Trust me, it's  all there, beautifully told but done so in a way that pings around exactly like the previous paragraph, except that it keeps looping back through things.  The result is a really informative film that doesn't seem to know what it is about. Actually it knows what it's about it just wants takes long time to get there and it wants to throw in a lot of other stuff along the way. It's kind of like looking at lose pictures instead of one in an album where everything is in the best order possible.

Rarely has any film frustrated me so much.

In reality as much as I am bitching about CANE FIRE being a mess I am forgetting to say that the film on its own terms is good. It isn't nearly as great as it should be but it is good. It raises a lot of questions that need to be looked into. It is a film that forces you to think about what Hollywood and tourism do, as well as consider the battle to earn a decent living.

I like CANE FIRE but I wanted to love it.  To that end I am going to recommend the film at Hot Docs, but with a warning that it does bounce around. 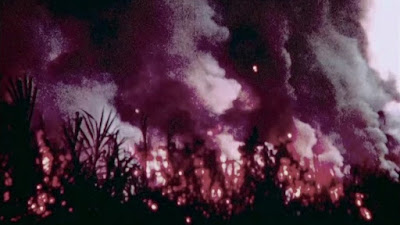