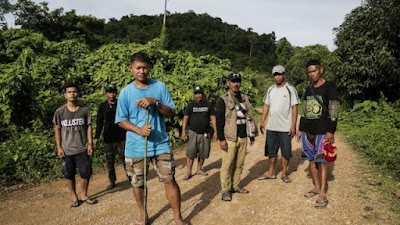 Delikado is  hell of a film. The film is the story  of the people on the island of Palawan in the Philippines who are fighting to keep their rain forest intact. One of the last rain forests in the world that hasn’t been severely compromised by the action of mankind the jungle is coveted by the rich and powerful. Who work to take to control of the land and resources by any means necessary.  Feeding into the madness is the former President Duterte’s criminal war on drugs, a reign of terror in disguise, where official and unofficial hit squads killed or brutalized anyone that they deemed part of the drug trade.

Lush and beautiful landscapes are counterbalanced by the evil that men do as activists and local officials are forced to fight the main government and interlopers. It’s a story which will make you angry.

The film is a portrait of three people Bobby Chen head of the Palawan NGO Network Inc (PNNI) which goes into the jungle to stop the illegal destruction of the rain forest. Efren "Tata" Balladeres, a one time government agent, turned activist and Nieves Rosento, mayor of one of the towns on the island. She is loved by her constituents and wants to keep the jungle intact. However her opponent is backed by the Philippines psychotic President Duterte and has been labeled as being in league with the drug dealers which makes her a target for the hit squads.

Structured like a thriller the film shows us the dangers of protecting the jungle and the land from the forces seeking to exploit the land for the profit of a few.  And there is danger since one of the people we are following dies during the course of the film. While you will watch the film for the suspense, the reality is you should see the film because it will make you understand just how the environment is under attack and how big business and big money doesn’t care who dies so they get money.

This is a great film and highly recommended

Be prepared to get angry.