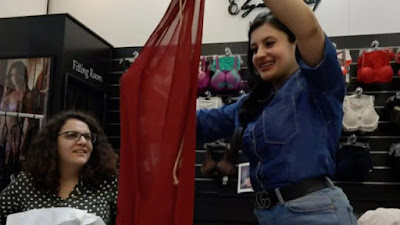 UP TO G CUP is a delight .
The film is the story of a Kurdish woman and a Yazidi woman who open up a shop selling women’s under garments in Iraq. It’s a delightful portrait of two woman following their passion while at the same time being a bracing look at a society that puts men in the fore front.  The road to success is not an easy one but the two women are game to try.
What I love about the film is that no matter what  you think the film is going to be it isn’t that.  This is a film that is as surprising as real life. It’s the cinematic equivalent to reading a news story or a guide book about a place and then when you go there you find it is completely different than what you expected. For me this is the result of two decades of watching TV news of Iraq and having it be a certain way in my head because of all the images of war. The reality is of course that it is a place of just regular people.
I was delighted.
Late in the film there is a film are some scenes of some older women in the shop sitting around talking. It’s a wonderful moment because it means that the place has become something. If people come and talk and are engaged, especially older ladies then you’ve created something special.
This film truly is something special. It is a film that reminds us that the images in the media are really just people and that we all share a common humanity.
Posted by Steve Kopian at May 22, 2022