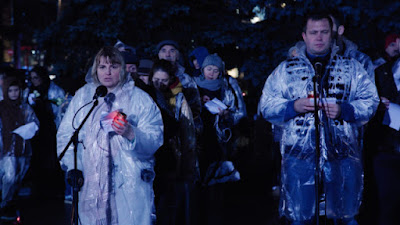 The New Greatness of the title was an on-line community where young Russians met up to talk about life. They spoke about the usual things in life. When politics started to be discussed with some questions about the Putin being raised someone in the group suggested they meet up to talk in person. This person turned out to be an agent for the Putin government with the result that everyone was arrested and their homes were raided. The kids were locked up and their parents, many previously pro-Putin, turned into activists in an effort to get their kids back.   The film focuses on the family of Anya, one of the people arrested and tossed in jail.

Filmed over a three year period the film is a look behind the curtain of Putin’s Russian. It’s a land ruled by fear and where even those supporting the government are afraid of their own safety. It’s a film that reveals how sometimes even in time of fear some people will take a stand when the life of a loved one is at stake.

How the New Greatness plays for audiences is now is going to be very differently than it would have been before the Russian invasion of Ukraine. I say this because watching the film I kept talking to the screen about how much worse things would have been had the events were playing out now. Where Putin and his stormtroopers were cracking down on anyone who refused to tow his party line, now things are much worse with anti-war activists disappearing.

This is a film which will make you angry. More so in light of current world events. I really can’t say more than that because the bullshit level of Putin and his lackies make it hard not to be detached and objective.

I will say the film is very recommended, especially if you want a look into the madness that is burning a hole into Europe