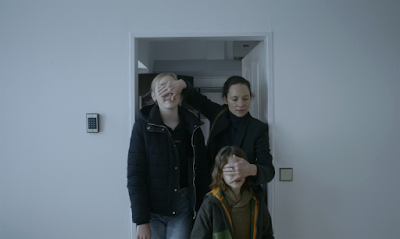 I'm not going to say a whole lot about HUMAN FACTORS. It's not that there is anything bad, in fact the film was on my list of must see films of Sundance 2021, rather I want  you to walk into the film knowing as little as possible since the less you know the bigger the impact.

The film begins with a family going to their summer hose for a brief off season vacation. There is a break in and then the aftermath... except that it's more complicated than that.

While I will not tell you what happens I will give you one detail because knowing it would have prevented a couple of minutes of confusion on my part and that is the film is not a straight narrative. Things are out of order and we will see events again from another person's perspective with the result what we think we know keeps changing. Its so shifting that I am desperate to see it again knowing where it goes.

One part family drama, one part psychological thriller HUMAN FACTORS grabs you and sucks you in. The thing is that the thriller part of the film is not really the result of any external factors but simply the interaction of the characters, we are on edge because we don't know what is going to happen next- even if we know what is going to happen next because we are getting a new context.

To be honest I wasn't certain about the film at the start. I wasn't really hooked with the family on vacation opening and the measured pacing of the opening sequence. But then things shifted. The film moved on and I found myself leaning into the film- I wanted to know what was happening and where we were going. What I thought was just going to be a meh film became something compelling. The shifting points of view adding unexpected layers.

As I write this I have not seen a great deal of films playing at Sundance, and while I have seen some I liked, some I didn't, a few I recommend, this is the first film of the festival I want to take to all my movie lover friends, press it into their hands and tell them "I don't know if you will like this, but damn this film is something special and far from run of the mill"