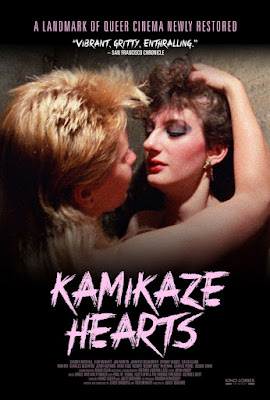 I have been running into Kamikaze Hearts since it came out and I’ve always been mixed on the film.  My first cross into it was when I was looking for racy content without looking for racy content and finding out this isn’t the film for me.  Later when my tastes changed I tried the film again I went back because of the good reviews.  My return visit was similar to the first viewing in that I found the film good but not really my cup of tea.

The problem with the film is that Mitchell and Tigr are not particularly nice people, at least as seen in the film. Fueled by various substances the then real life couple were in a weird death spiral of a relationship that makes the term dysfunctional seem like a walk in the park. To me watching the film is like watching a road accident. I keep waiting for the crash. Over the years I’ve heard all sorts of stories about what was happening between them, and while most were probably fabrications or inflations of actual events that still leaves a good number to curl your hair. I suspect having heard stories colored my viewings of the film, which is unfortunate since I see the film as rather unpleasant.

With the film getting a restoration and rerelease from Kino I just wanted to put my thoughts out there. I’m sure some people will love the film, but I’m not sure about the rest.

Email ThisBlogThis!Share to TwitterShare to FacebookShare to Pinterest
Labels: docufiction